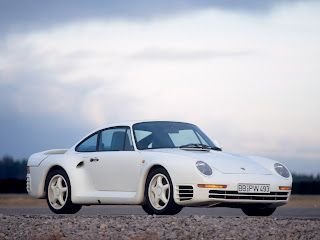 I just saw a Porsche 959  (by Baur, under Porsche supervision) sold at Barrett-Jackson Auctions for $400,000.  It looked identical to this one.

From Wikipedia, the free encyclopedia
The Porsche 959 was a sports car manufactured by Porsche from 1986 to 1989, first as a Group B rally car and later as a legal production car designed to satisfy FIA homologation regulations requiring that a minimum number of 200 street legal units be built.[2]
In 1986, it held the title as the world's fastest street-legal production car, boasting a top speed of 195 mph, with the sport model capable of reaching 197 mph. This was until the Ferrari F40's introduction in 1987; which was capable of reaching a top speed of 201 mph.[3] During its production run, it was hailed as the most technologically advanced road-going sports car ever built and the forerunner of all future super cars. It was one of the first high-performance vehicles to use an all-wheel drivesystem, providing the basis for Porsche's first all-wheel drive Carrera 4 model. In fact, it convinced Porsche executives of the system's viability so well that they chose to make all-wheel drive standard on all versions of the 911 Turbo starting with the 993 variant. In 2004, Sports Car International named the 959 number one on its list of Top Sports Cars of the 1980s.

Development of the 959 (originally called the Gruppe B) started in 1981, shortly after the company's then-new Managing Director, Peter Schutz, took his office. Porsche's head engineer at the time, Helmuth Bott, approached Schutz with some ideas about the Porsche 911, or more aptly, a new one. Bott knew that the company needed a sports car that they could continue to rely on for years to come and that could be developed as time went on. Curious as to how much they could do with the rear-engined 911, Bott convinced Schutz that development tests should take place, and even proposed researching a newall wheel drive system. Schutz agreed, and gave the project the green light. Bott also knew through experience that a racing program usually helped to accelerate the development of new models. Seeing Group B rally racing as the perfect arena to test the new mule and its all wheel drive system, Bott again went to Schutz and got the go ahead to develop a car, based on his development mule, for competition in Group B.

Porsche 959 at the Boston Museum of Fine Arts in 2005
Porsche developed an already existing engine instead of creating a new one from scratch. The powerplant, a twin-turbocharged six-cylinder boxer engine with an air-cooled block and water-cooled heads, displaced 2.85 liters, about half a liter less than a contemporary 911 engine. It was coupled to a unique manual gearbox offering 5 forward speeds plus a "G" off-road gear, as well as reverse. The motor had originally been developed for the "Moby Dick" race car and then been redeveloped slightly for the short-lived Porsche Indy Car and several other projects before being "tweaked" a last time for use in the 961, the 959's racing counterpart. The water-cooled cylinder headscombined with the air-cooled block, 4-valve heads and sequential turbochargers allowed Porsche to extract 331 kW (444 hp) from the compact, efficient and rugged power unit.[4] The use of sequential twin turbochargers rather than the more usual identical turbochargers for each of the two cylinder banks allowed for smooth seamless delivery of power across the engine RPM band, in contrast to the abrupt on-off power characteristic that distinguished Porsche's other turbocharged engines of the period. The engine was used, virtually unchanged, in the 959 road car as well.
In an attempt to create a rugged, lightweight shell, Porsche adopted an aluminium and Aramid (Kevlar) composite for body use along with a Nomex floor, instead of the steelnormally used on their production cars.[5] The vehicle's weight of 3,190 pounds (1,450 kg) helped to achieve its high performance level. 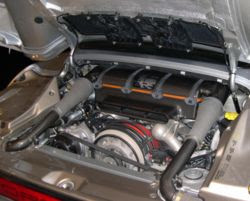 2.85-l-Biturbo-Engine
Porsche also developed the car's aerodynamics, which were designed to increase stability, as was the automatic ride-height adjustment that became available on the street car (961 race cars had fixed suspensions). Its "zero lift" aerodynamics were a big part of keeping it drivable[citation needed]. The 959 also featured Porsche-Steuer Kupplung (PSK) which was at the time the most advanced all-wheel-drive system in a production car[citation needed]. Capable of dynamically changing the torque distribution between the rear and front wheels in both normal and slip conditions, the PSK system gave the 959 the adaptability it needed both as a race car and as a "super" street car. Under hard acceleration, PSK could send as much as 80% of available power to the rear wheels, helping make the most of the rear-traction bias that occurs at such times.[6] It could also vary the power bias depending on road surface and grip changes, helping maintain traction at all times. The dashboard featured gauges displaying the amount of rear differential slip as well as transmitted power to the front axle. The magnesium alloy wheels were unique, being hollow inside to form a sealed chamber contiguous with the tire and equipped with a built-in tire pressure monitoring system.[7] 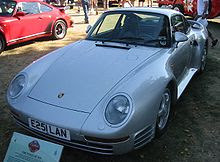 Porsche 959
All Porsche 959s were actually produced at Baur, not at Porsche, on an assembly line with Porsche inspectors overseeing the finished bodies. Most of Porsche's special order interior leather work was also done by the workers at Baur.
The 1983 Frankfurt Motor Show was chosen for the unveiling of the Porsche Group B prototype. Even in the closing hours of October 9, finishing touches were being applied to the car to go on display the next morning. After the first two prototypes, the bodyworkwas modified to include air vents in the front and rear wheel housings, as well as intake holes behind the doors. The first prototype modified like this was code named "F3", and was destroyed in the first crash test.[citation needed]
The street version of the 959 debuted at the 1985 Frankfurt Motor Show as a 1986 model, but numerous issues delayed production by more than a year. The car was manufactured in two levels of trim, "Sport" and "Komfort", corresponding to the race version and the street version. First customer deliveries of the 959 street variant began in 1987, and the car debuted at a cost of $225,000 USD per unit, still less than half what it cost Porsche to build each one. Production ended in 1988. In total, 337 cars were built, including 37 prototypes and preproduction models.[1] At least one 959 and one 961 remain in the Porsche historic hall in Stuttgart, Germany.
In 1992/1993, Porsche built eight 959s assembled from spare parts from the inventory at the manufacturing site in Zuffenhausen.[1] All eight were "Komfort"-versions: four in red and four in silver. These cars were much more expensive (DM 747,500) than the earlier ones (DM 420,000). The later cars also featured a newly developed speed-sensitive damper system. The cars were sold to selected collectors after being driven by works personnel for some time[1] and are today by far the most sought-after 959s.
The 959 was not street legal in the United States prior to 1999 when the "Show and Display" law was passed, although an unknown number were imported via the "grey market" during the late 1980s as show pieces. During the model's development Porsche refused to provide the United States Department of Transportation with the four 959s they required for crash testing, and the car was never certified by the National Highway Traffic Safety Administration for street use in the U.S. With the passage of "Show and Display" the crash test requirements were removed and importation of the 959 was allowed, assuming the car could meet the emissions standards applicable in 1987. The 959 can be fitted with a catalytic converter and a rechipped computer which allows it to meet those emissions requirements. As they are pre 1996 they would not be required to pass any emissions testing anymore.
Most owners refuse to modify their 959s, however, and the cars remain collection pieces. Most 959s are in the hands of collectors, but a few do occasionally come to market, with prices in the region of 180,000–250,000 EUR (cars produced in 1987/1988). It is impossible to estimate the price of cars from the highly limited batch of 1992/1993.
The lessons learned from the 959 project about engine management, aerodynamics, suspension tuning, and 4-wheel drive were what enabled the production life of the 911 to be extended to the present day.

The performance of the 959 Sport is as follows:[8]

When Porsche began development of the 959, it looked toward Group B racing as a road-racing laboratory with which to develop technology for production cars. When Group B became focused on rallying events, however, Porsche felt the relevance to production cars was greatly reduced, and the goal of the 959 project shifted to frank state-of-the-art, cost-no-object technological innovation. 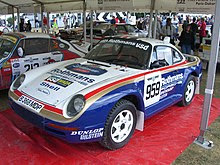 Porsche 959 Rally variant
In 1984, however, three 911s modified to 959 specifications (due to the requirement that Group B cars be based on production cars with at least 200 built) were used in the Paris-Dakar Rally, with Jacky Ickx the prime motivator. By 1985 the 959 rally variant was ready, but it experienced a disappointing start: all three cars failed to finish. However, in 1986 the 959 finished 1-2. The 959 was never seriously considered for a Group B Rally season; the cost of completing a full season far outweighed any technical information that would have been gained. The car was produced as a 1/12th scale radio control model from Tamiya which is now widely collected by fans (see collectors models)
1986 was also the year that the racing variant, the Porsche 961, made its debut at the 24 Hours of Le Mans. Driven by René Metgepartnering Claude Ballot-Léna, it finished first in its class and 7th overall. It returned in 1987 but failed to finish after a spin (missed gear change) while in 11th place by Canadian/Dutch driver Kees Nierop of Vancouver. Upon rejoining the track the car was observed on TV monitors in the Porsche pits to be on fire and the driver was told to stop and get out of the car. Sadly Nierop pulled over between marshal stations and this extra time taken to get to the car by the marshals allowed the fire to consume most of the rearend and writing the car off for further racing. Thus ended the career of the 961.

In 2003, Canepa Design initiated a 959 program. By making their own modifications to the 959's turbo, exhaust and computer-control systems, Canepa could enable the 959 to pass emissions requirements (thereby making it street-legal in the United States) and extract more power from the 959's engine. Total power output from the Canepa-modified 959 is 640 hp (477 kW) and 570 lb·ft (773 N·m) of torque, making the car capable of 3 second 0-60 times and top speeds in excess of 220 miles per hour (350 km/h).[10] Canepa also modifies the 959's lightweight magnesium wheels to allow the fitting of tires without the unique Dunlop Denloc bead, and fits a modern Michelin high-performance tire capable of handling the increased performance.

The "Gates 959" is an infamous car,[11] one of the Porsche 959s built in the mid-eighties, imported by Bill Gates to the United States in 1987. Gates' fellow Microsoft co-founderPaul Allen imported another one, as did Porsche collector Jerry Seinfeld. These cars had not been approved by regulators and had no Department of Transportation andEnvironmental Protection Agency approval. The "Gates 959" was stored for 13 years by the Customs Service at the Port of Seattle, until regulations were changed to allow "Autos of Interest" to be imported with severe limitations on their use.[11] Gates and Allen both helped pass the "Show and Display" law.[11][12]