Here is an old thread about a US TC2 Baur Turbo from 2010. I dont recall seeing it, so it may be a new find.  I wonder if it is still around. 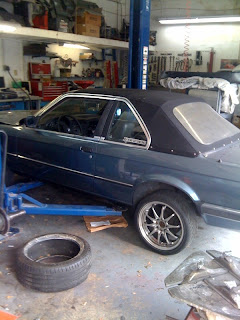 Owner cbb2q says:
"I just bought a 1984 323i baur tc. Saw it on craigslist and couldn't pass it up. It was a turbo project he never finished. I towed it to the shop and now it sits. I'm waiting to hear if the set up is legit or if I'm gonna need a motor swap, etc. Body is awesome. Painted gray/light blue with black top, flawless. Interior is not original but has been redone with black microsuede accents, even the underside of the tops. It is not the original motor. Looks to be sourced from a 325e."

Some interesting info in the thread from Jeroen, btw.


"Your car has Baur-number B41516-14. It was original a 323i in Balticblau (indeed grey/blue) with a blue (that's where the -14 stands for) roof. The original interior was also blue, Stoff Pacific 151. It also has tinted, green windows. When new it was sold by "Buchner & Linse" in München, Germany. It was converted by Baur on the 9th of Februari 1984.