You may be aware of Google's autonomous car that was recently in the news.  There was a video of a robot car driving a blind man to get a bite to eat.  Well, if you missed it, you can see it here.
http://baurspotting.blogspot.com/2012/05/googles-self-driving-car-passes-test.html

But you may not know, that BMW has ALSO been working on that kind of technology.  I certainly didn't know about this until now.

Well, BMW was one of the Official Sponsors of the recent London Olympics, right?  And you probably saw those cute little Minis that BMW had running all over the field, retrieving the shot puts, discus and the like.

But apparently, BMW went even further in trying to not only provide a meaningful sponsorship for the event,   but also to actually work to enhance the health of BMW owners.  I have never heard of another car company going to such great lengths to demonstrate their concern for their customer's health.  BMW again moves to the forefront of not only automotive technology, but also makes a significant contribution to the health care field.  That is truly going above and beyond the call of duty, and I applaud BMW's efforts in this regard. 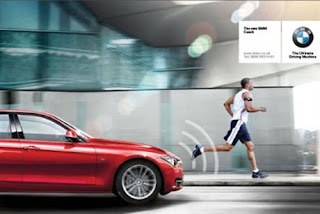 Here is the BMW unveiling of the new technology. 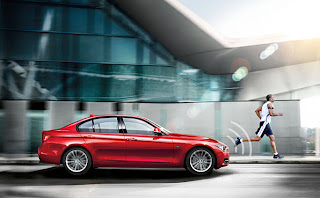 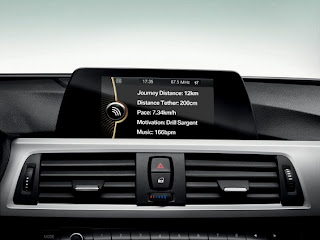 BMW state: 'As an official sponsor of London 2012, BMW has been inspired to develop a new technology helping customers to boost their fitness in the run up to the Games. The new driverless Running Coach feature uses a combination of ConnectedDrive technologies and surround view cameras to enable the car to follow the runner, at a safe distance, while pounding the pavement. To help with motivation, integrated exterior speakers play encouraging words while the Lock Out Logistics feature makes sure that any distance set is completed without cheating.

Alvin Alaff, Head of Futile Innovations at BMW’s renowned Forschungs und Innovationszentrum, said “It’s a car gym but not as we know it.” Further details on the driverless Running Coach can be found by contacting 0800 561 0080 or emailing alvin.alaff@bmw.com.'

Can you tell me more about the April Fool's adverts?
Each year WCRS (BMW's advertising agency) produces a tactical April Fool's day advert which appears in the broadsheet press on April 1st only.
The April Fool's day concepts are designed to teeter on the verge of credibility, therefore taking in scores of slightly less vigilant readers. The concepts tend to focus on a new and revolutionary piece of technology from BMW, yet push the idea just beyond the plausible.
The tongue-in-cheek adverts take exactly the same format as all non-spoof BMW adverts, hence it is down to the reader to notice the difference between the plausible and the
non-plausible.
April Fool's day adverts have become a BMW tradition primarily aimed at BMW drivers as a once-a-year opportunity for them to drop their guard and have a laugh at themselves. They have all the wit generic to many of BMW's brand adverts and allow the intelligent owner to feel part of the BMW tradition.