OK... as promised.... more Baur pics from The Vintage this weekend in Old Salem, NC.   Baur owner HarryPR  attended, and agreed to be Baurspotting's eyes and ears!.  Although he couldn't bring his own Baur, Harry attended with a friend who provided him with a white 2002 for the occasion!  Not too bad!!

Recruiting Harry in Facebook back on May 23:
Tom Schuch  Can I offer you a job as the Official Baurspotter for The Vintage? I will DOUBLE what I paid last time! ;) I know Reggie's Motorworks from Indiana is bringing their dark brown TC2. It was there last year also. Tell them Baurspotting says hello for me, if you get to see them. Have a ball, Harry!!
Harry Bonkosky I accept the mission, Tom!
Tom Schuch You Da Man!, Harry! 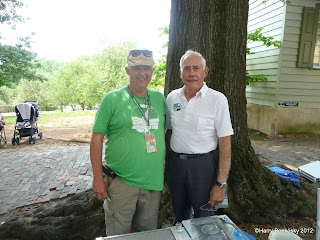 Our Man at The Vintage! (HarryPR in green) 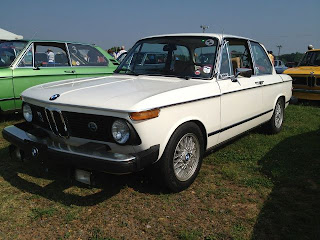 Harry took a ton of pics---Thanks, Harry!!!---- and a link to his album is attached below.  Be sure to check that out!

A local TV station did a nice short on The Vintage.... it is well done, adding a little personal and human touch.  I enjoyed it, so I have included it here.

OK, here are the Baur pics that Harry took on Saturday: 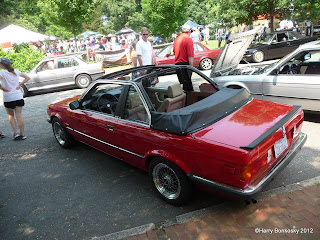 Beautiful red TC2.  There were two red TC2 Baurs at last year's event.  We don't know if this is one of those, or if it is a new Baur to us.  Anyone have any frontal pics?  The owner's name is Scott, per BMWtyro.  Thanks Jeff! 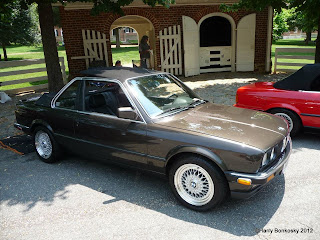 Dark Brown TC2 from Reggie's Motorworks in Indiana.  This beautiful Baur was at The Vintage in 2011 also. 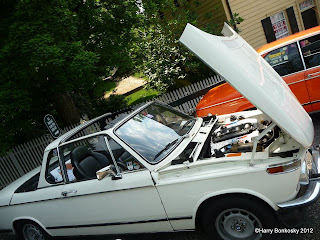 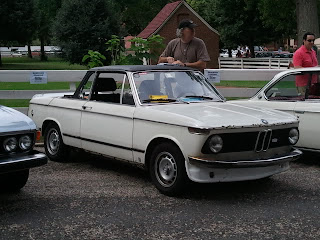 (This 2002 Targa appeared at The Vintage in 2011, last year.  TC2 Baur owner BMWtyro, who has seen both, asked if this can be the same car as the one above it, one year later?  If so, kudos to the owner!!  He has done some nice work.) 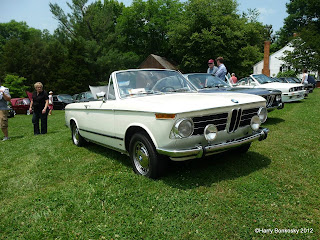 Bimmerforums member pommeree also posted some Baur pics, one of which we posted earlier today (see previous post).  I missed another Baur pic in his file, so I present it to you now.... a nicely framed pic of Reggie's Motorworks dark brown TC2 Baur: 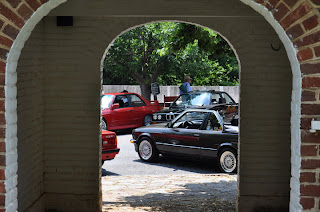 I will repost his other Baur pics from The Vintage for the sake of completeness here: 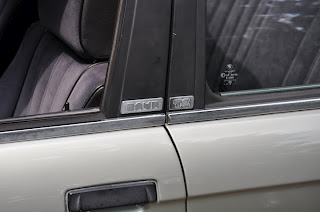 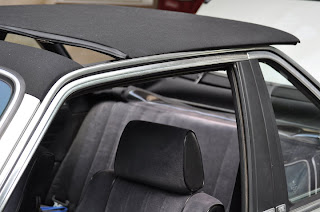 Both of these are pics of bimmerforums member BMWtyro's Opalgrun 320i.    BMWtyro was present and reports that he saw a total of 5 Baurs at The Vintage, as follows:
"Here is the Baur report from The Vintage: five Baurs were present (that I counted). There were two 2002s (both white), one of which was a Voll (no targa bar); and three E30s: my Opalgrün 320i, a Zinnoberrot 323i and a Braunsable (sp?) 318i from Indiana."

Thanks Harry, Eric (pommeree) and Jeff (BMWtyro) for your support in helping Baurspotting provide coverage of this great event!

This event was a little far for me to attend, but I must admit I love that setting, and I love the Vintage emphasis.  I contrast this with last year's Bimmerfest East:   a HUGE event with about 1900 bimmers registered.  I attended with my son, Brian, and we had a great time.  However, the emphasis at Bimmerfest East was clearly on the later model cars.  Vintage models were far and few between, and IMHO, were very much underappreciated.

I think I much prefer a smaller event, like The Vintage with 200-300 Vintage BMWs in a beautiful historic setting like Old Salem, to the huge Bimmerfest East with 1900 mostly new models, held in a baseball stadium parking lot.

Here is an event to consider, which I think will be much more to my liking, and perhaps to yours also:  http://www.vintageatsaratoga.com/
"The third installment of Vintage at Saratoga will be convened at the Saratoga Automobile Museum on the weekend of July 13, 14, and 15, 2012."

Mark your calendars!  Let's see how many Baurs we can get at THIS event!

As an added incentive, Lothar Schuettler brought---- no, he actually DROVE--- this Concours 1956 502 Baur Cabriolet to the Vintage at Saratoga last year. 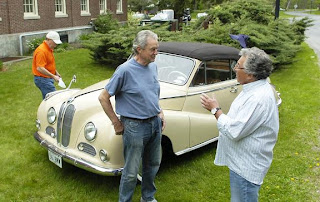 You may remember Lothar:
http://baurspotting.blogspot.com/2012/05/lothar-schuettlers-garage.html

Say no more!  See you at Saratoga!