On Sunday, August 9, 2015 I made the 115 mile trip up to Brookline, MA to attend one of my favorite BMW events at one of my favorite venues:  BMW Day 2015 at the Larz Anderson Museum.  I departed my house on schedule at 6:20am, leaving time for a quick stop at the local Starbucks for a doppio for the road!  I love the smell of a double espresso in the morning!  ;) 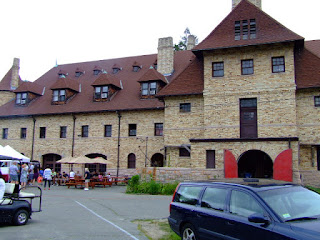 Here is the venue:  the Larz Anderson Automobile Museum.  The Museum contains the Anderson automobile collection of Antique and Vintage cars spread over the ground floor and the Main Floor.  The Main Hall features a different Exhibition each year.  This year the feature is Motorcycles, and although I am not a Motorcycle guy, it is very cool.  (I will do a post on the Motorcycles at the Larz Anderson Museum, TBA!  It is IN THE WORKS!)  That exhibit and the Anderson Collection alone are worth the trip, if you have never been there!  Attending  the Museum on BMW Day was just the icing on the cake!  I love this place!  Go!

Incidentally, registration for the BMW Day event includes admission to the Museum.  It is a bargain!

OK, back to the Baurs!  My friend, Afonso, ---the only other known Connecticut E21 Baur----was scheduled to bring his beautiful 1978 Baur #48 to the show with me, but unfortunately had to cancel at the last moment.  We missed you, Afonso!  ;) 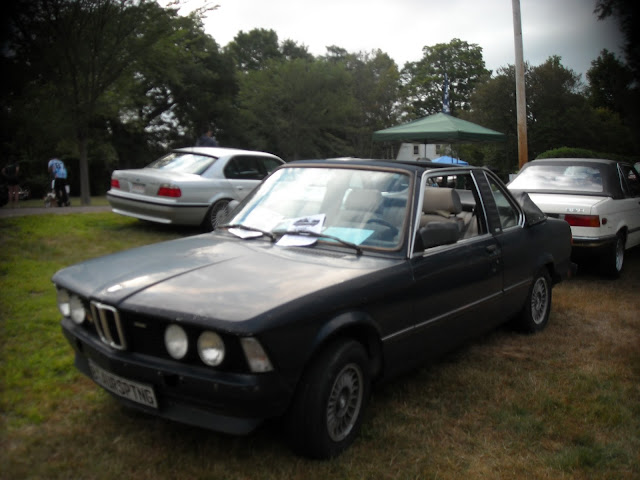 I had a great top-down (of course!) ride up to Brookline, and I arrived around 8:30ish.  I entered the "Display" section (as opposed the the 'Judged section).   My Baur is a daily driver, and definitely looks the part!  I get a lot of compliments on it from folks who appreciate that, with 300,000+ miles, and daily use, this is a car that is well used, and well loved.  And it is true:  I will never sell this car!  :)

The show was not scheduled to actually open until 10am, but I like to get a good parking spot!  I was greeted by Andrew Plante of the Boston Chapter, and I was very pleasantly surprised to be pointed to what appeared to be the "Baur Section' for parking!!  Whoa!  There were two Baurs already parked there ahead of me!  Nice! 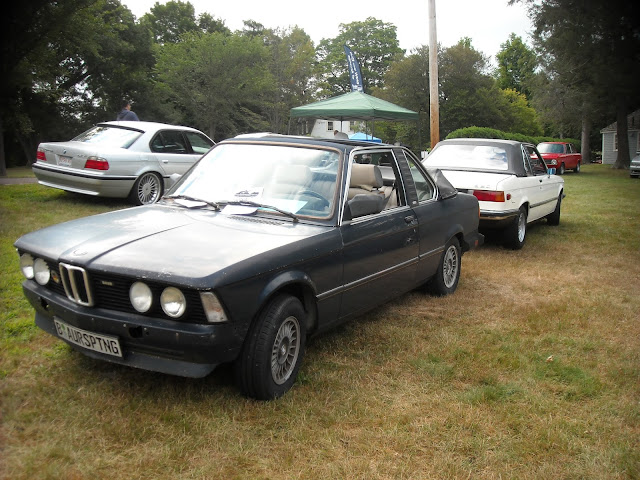 I backed up behind my friend, Rodney B's 1979 320/6 in white.  Regular blog readers may already know that I love the E21 in white, and Rodney has a great example! 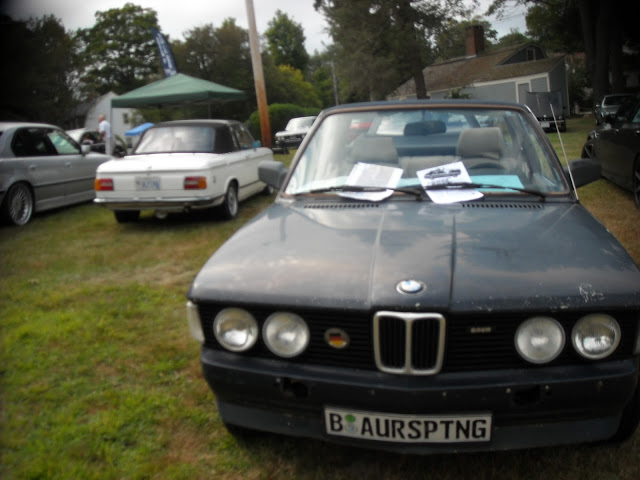 And, parked next to Rodney, is Peter M. and his wife in their 2002 Cabrio Targa by Baur!  The day is off to an excellent start! 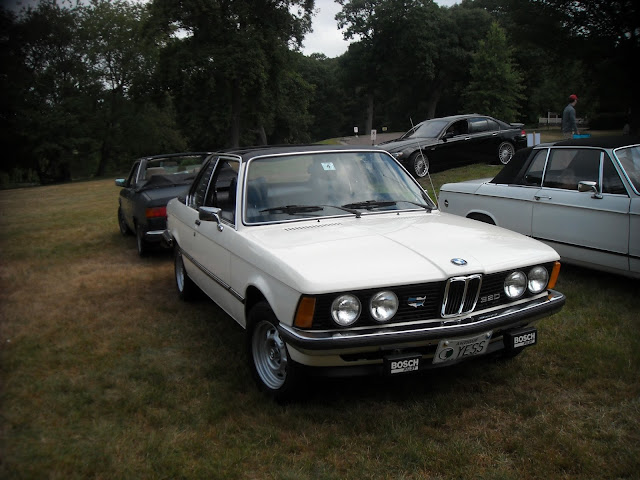 Rodney's TC1 and Peter's Cabrio Targa.  Both are from New Hampshire, btw. 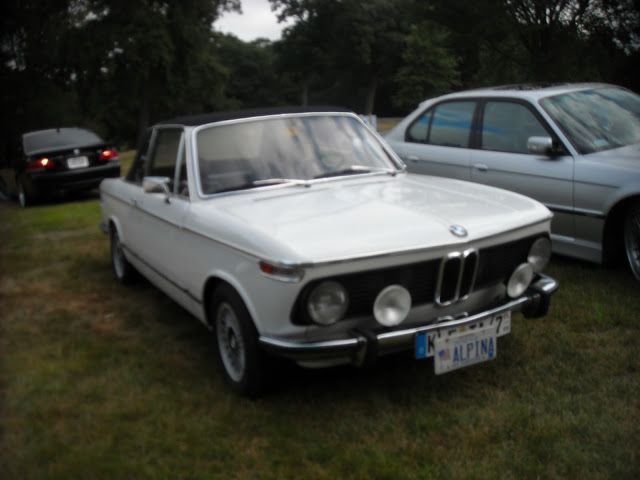 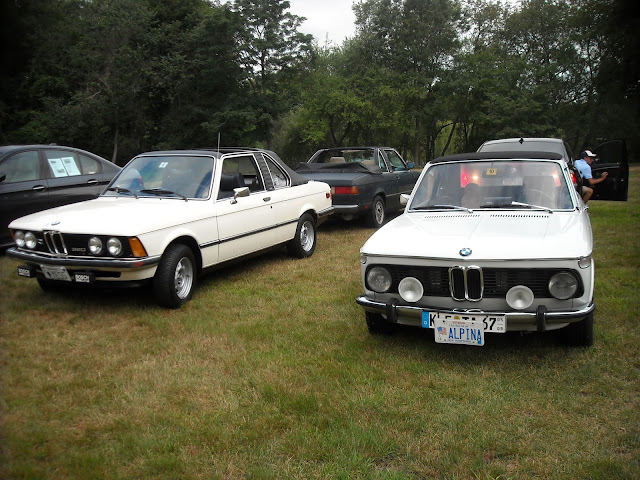 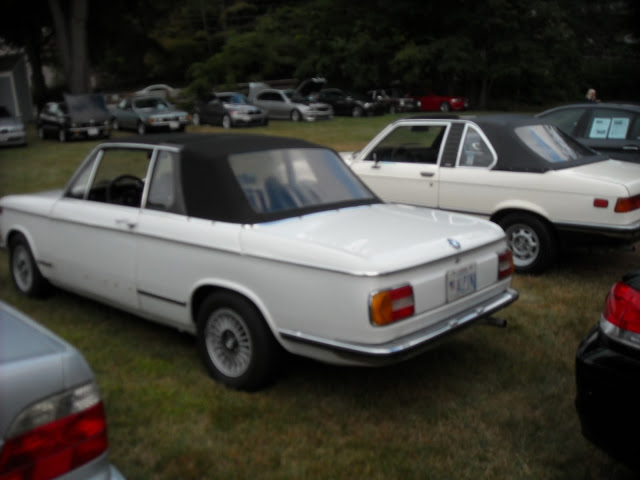 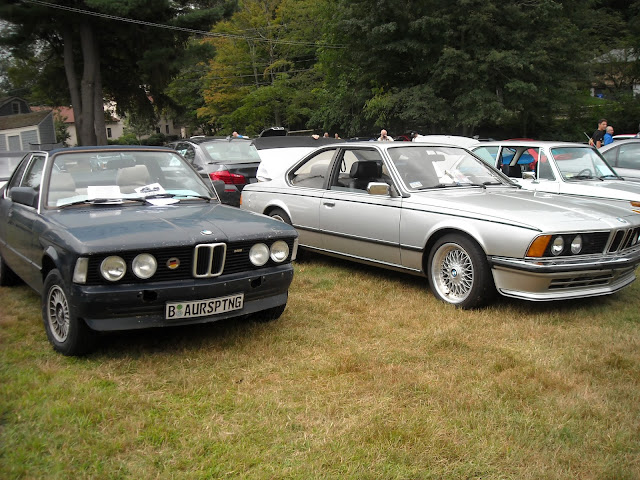 Whoa! now look who popped in!   I would recognize those rims anywhere! 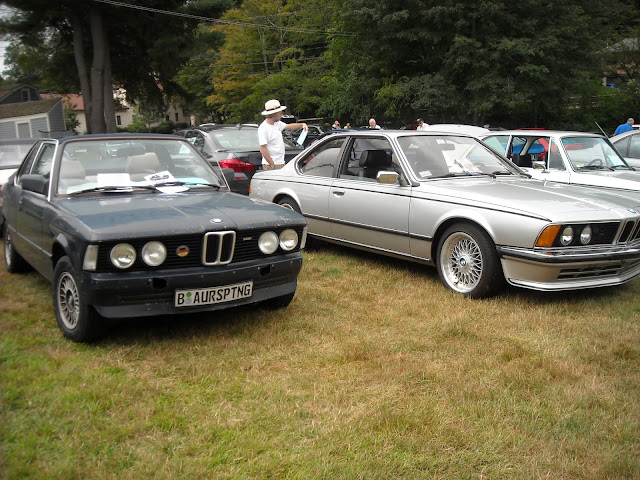 And there he is:  Rob 'The Hack Mechanic' Siegel himself, parked next to the Baurspotting Baur!   I am honored!
OK, now here is the fourth, and final, Baur of the day:  M1 by Baur! 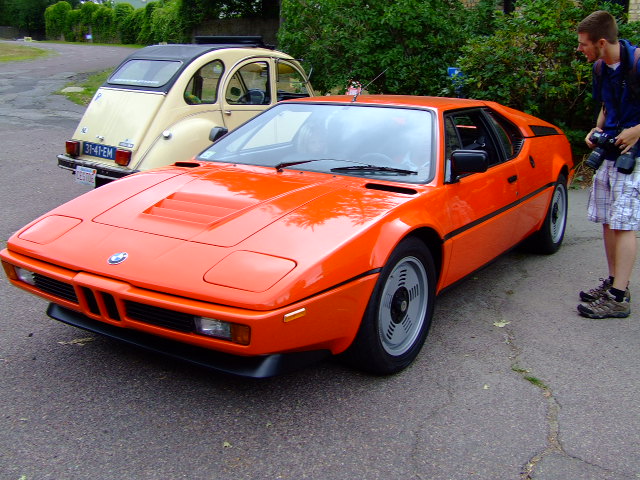 Neil's M1 by Baur.  I arrived at this scene in this nick of time:  this photographer was asking Neil (who was departing the show) to pause a moment so that he could get a pic.  I overheard him ask, so I sidled right up alongside and took a couple of pics of my own. 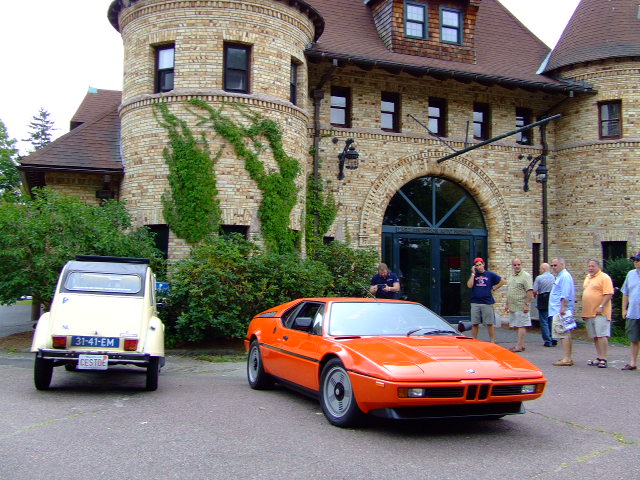 I love this shot of the M1 in front of the Main Hall entrance of the Larz Anderson Automobile Museum--- with the Deux Chevaux next to it!  I had a great time chatting with the owner of that Deux Chevaux, and I just love the juxtaposition of these two classic cars in front of the mansion:  an iconic utilitarian 'car of the people' alongside the BMW supercar!  I love it! 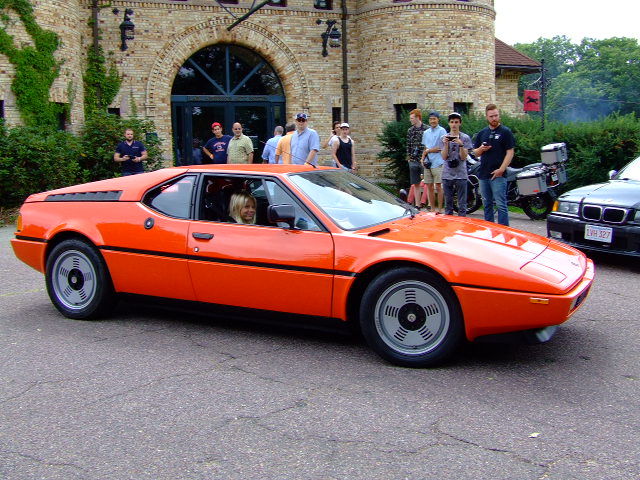 In case you are wondering what the Baur connection to the M1 is..... final assembly of the M1 was completed at the Baur Works in Stuttgart, under BMW supervision.

That child's smile speaks volumes!  Trust me, I was wearing a huge smile at that moment also!

A great fun time at BMW Day at the Larz Anderson Automobile Museum.  I have about 200 more photos still to come on the rest of the show, but I wanted to get this Baur post up first!

Thank you, Rodney and Peter!  It was great to see you guys, and I know the 'Baur section' was a huge hit, thanks to you!   I can't tell you how many times I heard someone say.... 'I have never seen a Baur in person"..... and we showed them THREE examples!

I had two favorite moments sunday:   one was the chat I had with an elderly gentleman, with whom I shared my Baur spiel.  He said that he comes to BMW Day every year, and every year he learns something new.  This year he learned about Baurs, and he thanked me.  Lovely gentleman, from Norwood, MA, I believe.

The second, and very unexpected, favorite moment was with the owner of the French Deux Chevaux.      Totally unexpected, came out of nowhere, but the highlight of the day!  Who knew??   ;)  But that will be the subject of another post, still in the works.  Made my day!