I found this today while looking for something else entirely, naturally.
;) 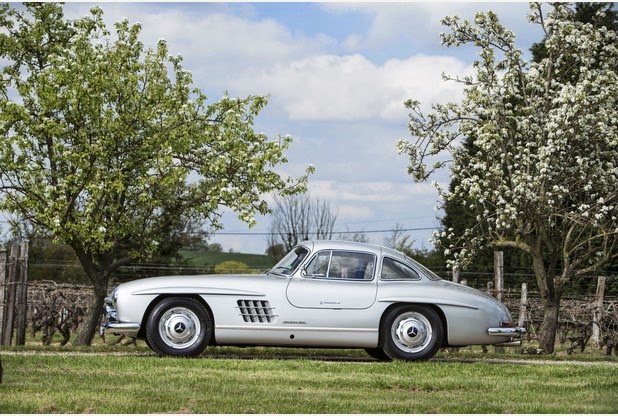 the Mercedes-Benz 300SL 'Gullwing' Coupe used by Sir Stirling Moss and his factory team navigator, Motor Sport magazine journalist and former World Champion Motorcycle Sidecar racing passenger, Denis Jenkinson, during course reconnaissance preceding their victory in the 1955 1,000-mile Mille Miglia round-Italy road race - one of the most illustrious and legendary drives in all motor sporting history, which will be offered for sale at its inaugural Mercedes-Benz Sale on 12 July 2014 at the Mercedes-Benz Museum in Stuttgart, Germany.
http://www.westernmorningnews.co.uk/gullwing-Mercedes-300SL-helped-Stirling-Moss-win/story-21080367-detail/story.html 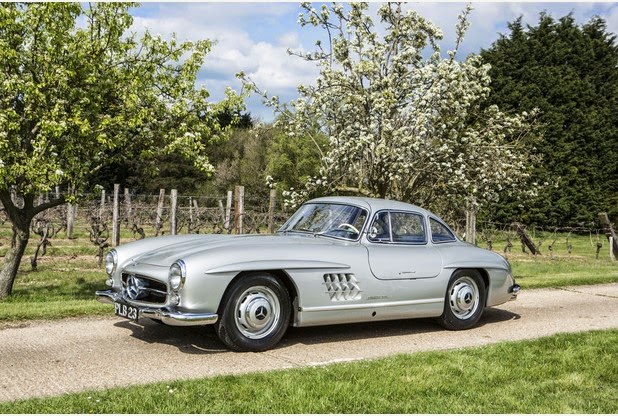 Read this first:
http://baurspotting.blogspot.com/2013/05/the-greatest-piece-of-automotive.html
I think this may be the single greatest piece of automotive journalism I have ever read.  Denis Jenkinson rocks!  Baurspotting loves Sir Stirling anyway (see previous Stirling Moss posts in Baurspotting), but this story just had me on the edge of my seat.... brilliant!
(Yes, I have read and loved David E. Davis Jr's famous "Turn Your Hymnals to 2002", about the BMW 2002.  That is Number Two on my list.  http://baurspotting.blogspot.com/2012/04/1968-bmw-2002-turn-your-hymnals-to.html  ) ----Editor 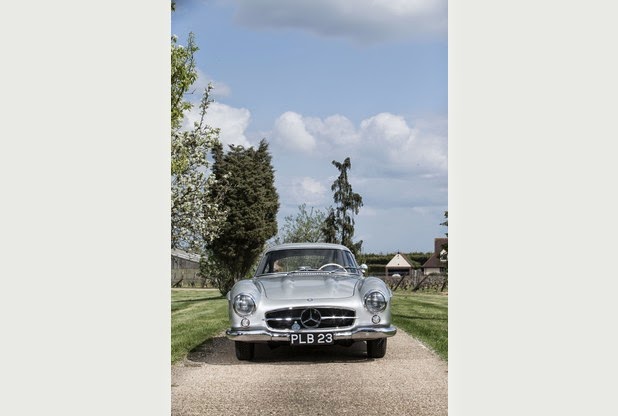 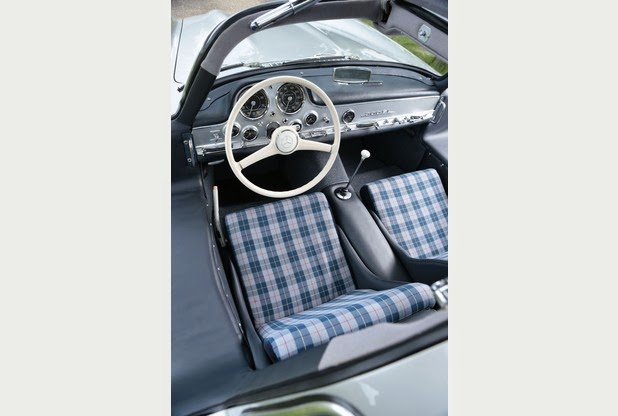 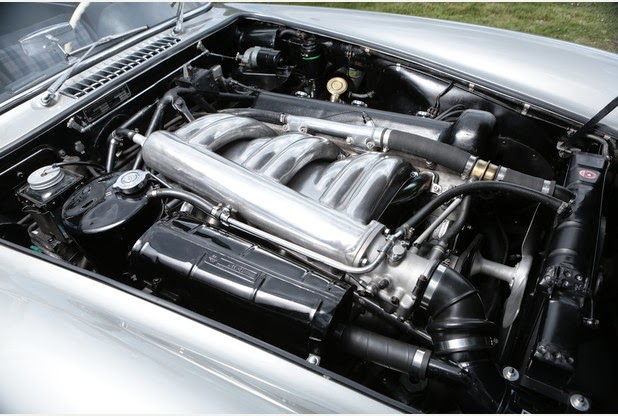 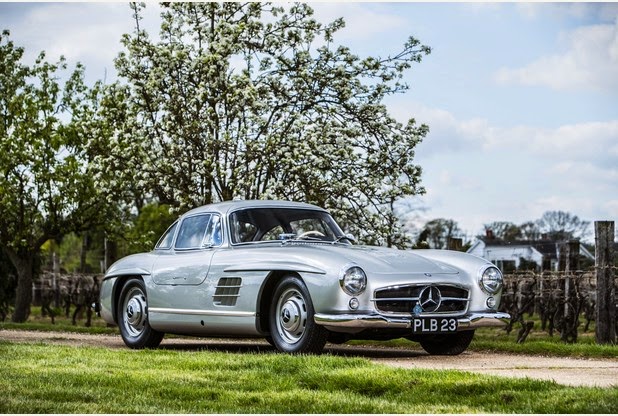 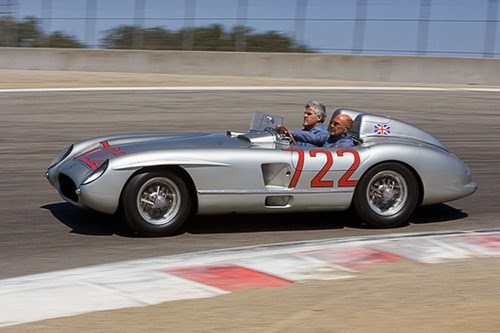 Sir Stirling Moss with Jay Leno in the original '722' 300SLR that won the 1955 Mille Miglia, with Moss driving and Denis Jenkinson as navigator.

At its inaugural Mercedes-Benz Sale on 12 July at the Mercedes-Benz Museum in Stuttgart, Germany, Bonhams is to offer at auction one of the earliest surviving and most significant of all Mercedes-Benz 300SL 'Gullwing' Coupes.
The 'Gullwing' being offered is chassis serial '4500019', whose eventful past includes being the model-launch vehicle displayed by Daimler-Benz at the 1954 Paris Salon de l'Automobile exhibition; the 1955 London Motor Show car displayed at Olympia; and the 1955 'Autocar' magazine road-test car.
Even more significantly, Stirling Moss (Knighted in 2000 for services to Motor Sport) and his factory team navigator – 'Motor Sport' magazine journalist and former World Champion Motorcycle Sidecar racing passenger, Denis Jenkinson – used this car during course reconnaissance preceding their stupendous victory in the 1955 1,000-mile Mille Miglia round-Italy road race – one of the most illustrious and legendary drives in all motor sporting history.
World-renowned in period – and much coveted by collectors today – the 3-liter 6-cylinder fuel-injected 300SL 'Gullwing' Coupe was, from 1954-57, the world's fastest production supercar.
When Mercedes-Benz set out to add the Sports Car World Championship to its Formula 1 World title successes in 1955, the opening race of the series was the astounding Mille Miglia – one lap of a thousand-mile public road course starting and finishing in the northern city of Brescia.
On May 1, 1955, the new Mercedes-Benz team of open-cockpit 300SLR sports-prototype cars simply destroyed their Ferrari and Maserati opposition to dominate the Mille Miglia, scoring an historic 1-2 triumph, with Stirling Moss/Denis Jenkinson winning from reigning Formula 1 World Champion Juan Manuel Fangio. Moss credited much of his extraordinary victory to navigator 'Jenks' who, for the entire 1,000 miles, had been able to warn Stirling "...of corners that could kill us, and of opportunities to stay flat-out and so save time".
Their knowledge had been accumulated from painstaking reconnaissance runs around the 1,000-mile course. Mercedes-Benz 300SL 'Gullwing' Coupe '4500019' now to be offered by Bonhams is the car used by Moss/Jenkinson during this reconnaissance period.
On April 1 1955 they drove it out of Brescia – where the Mille Miglia would start a month later – in company with young German team-mate Hans Herrmann in the first of the full-race 300SLR open-cockpit cars. Jenks's diary for the day records: "Left Brescia 6.30am in 300SL – Herrmann in 300SLR. Averaging 78mph – crash with Army lorry at Forli. All day sorting things out with M-B technicians. Home in 220A" – Mercedes saloon car – "...by 1 am."
On Monday April 18 the duo again left Brescia at "7am in SL and drove to Florence, 1500kilometers. Terrific fun helping driving on blind corners...Fangio passed in Verona – Herrmann later in SLRs...". Next day "...Left 9am and another good drive back to Brescia". On the 20th Moss/Jenkinson got their chance in the open SLR only for its crankshaft to break at Rimini, while "Fangio had broken SL...".
Jenks's diary entry for May 1, 1955, is astonishingly succinct. It simply reads: "Up at 6am for race day. WE WON. Party in evening with Mercedes-Benz.Bed at 1am". That was, for the team and for its all-British crew, mission accomplished.
Mercedes-Benz 300SL 'Gullwing' Coupe '4500019' was subsequently sold by Mercedes-Benz GB to HW Motors Ltd of New Zealand Avenue, Walton-on-Thames (themselves manufacturers of the famous HWM racing cars), then to enthusiast private owner Peter Woozley. He raced the car at club level and set fastest lap in finishing second in the Stanley Sears Trophy race at Snetterton in 1959. The car is offered today fully restored to original 1954-55 specification and is as exhibited in the world-renowned Pebble Beach Concours, California, in 2011.
James Knight, Group Motoring Director at Bonhams, commented, "This is arguably the most historic 300SL Gullwing extant and is the latest consignment to the auction at the Mercedes-Benz museum in Stuttgart. We have a few spaces left, and those final entries are invited for what promises to be a very memorable sale".
The Mercedes-Benz Museum in Stuttgart maps the entire history of the world's oldest car manufacturer with a unique variety of exhibits. A total of 1500 exhibits, including 160 vehicles, can be seen on an area of 16,500 square meters.
http://www.bonhams.com/press_release/16527/