Personally, I much prefer this kind of an ending to the story, rather than what happened to this poor VW Cabrio:
http://baurspotting.blogspot.com/2013/03/the-old-folks-at-home-retired-bmw-2002s_8.html 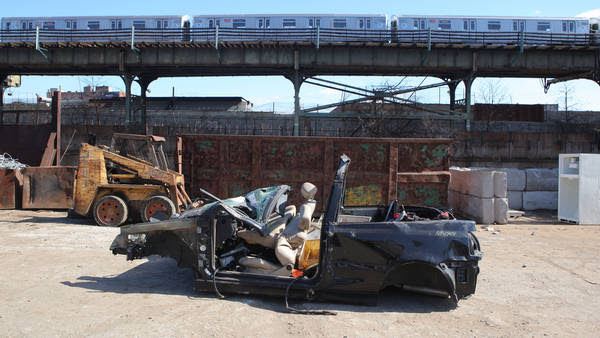 Adieu to a Beloved VW: Thousands of cars were flooded with saltwater in Hurricane Sandy, including the VW Cabrio owned by Michael Winerip of the Times. He sadly follows this family treasure on its trip to the crusher.

Cause of death: inundation by salt water.
The car was flooded in our driveway on the night of Oct. 29, when four feet of ocean breached the dune that had long served as our flood barrier and surged down our street.
It lingered for nearly four months. The first week after the storm, the Cabrio drove fine. I thought I’d dodged a bullet, and then one thing after another stopped working — the radio, the pump that lowered and raised the top, the heater fan ...
Not long after, the insurance company told me they were going to total it, and I decided to follow the car each step of the way to its end, wherever that took me.
I wanted to answer a question as old as the gas engine: Exactly where do flooded cars go to die?
There had been news reports of cars being taken to the Midwest for resale or turning up on eBay, and I wanted to see if mine would be given a proper send-off. That was why on Nov. 30 I rode with John Cohen, owner of Countywide Towing Enforcement, who was contracted by State Farm to tow the Cabrio from our driveway to an impound yard in Medford, on Long Island, an hour’s ride away. There it joined thousands of flooded cars — total losses as far as the eye could see, all waiting to be auctioned.
Usually, cars in these wrecking yards arrive smashed up. After Sandy, things had changed: Mr. Cohen, 49, has been towing most of his adult life and was struck by how normal the flooded cars looked.
Salt water is a hidden killer.
With the help of State Farm, I tracked the Cabrio when it was sold to the highest bidder, Sal Ingardia, general manager of Alliance. And I was there on Feb. 21, when Wilson Mora, one of Alliance’s dismantlers, removed the battery and gas tank.
“Once the battery’s out, no electrical,” Mr. Ingardia said. “Once the gas tank’s out, no gas. The car is dead.”
At 1:09 p.m., after a considerable struggle, Mr. Mora yanked out the battery and then, using a crowbar the size of Mario Andretti, pried the gas tank loose. “That’s it,” Mr. Ingardia said, and peering into the dislodged gas tank, he noted, “It was full.”
Exact time of death: 1:23 p.m.
The National Insurance Crime Bureau estimates that 250,500 cars were lost in Sandy, and this is the story of one of no particular importance — except that it was mine. The Cabrio was a bitty thing, born with just 4 cylinders and weighing but 2,838 pounds, assembled at a factory in Puebla, Mexico, according to its window sticker, with a transmission that had been shipped from Germany. It entered this country through the Port of Boston, known only by its vehicle identification number, 3VWDC21VX2M807914, (or 807914 for short).
The sticker price was $23,825. I bought it three years ago, with 137,526 miles, for $3,300.
It was the family’s happy times car. The best thing by far: it was a convertible. I drove it mostly around town, top down, radio up. It didn’t use a lot of gas. Even food shopping was more enjoyable in a convertible — so easy to toss grocery bags in the back seat.
I can’t say that it made me feel young, but I did feel better about being old.
I never washed it, and it still looked black.
At first my three teenage sons made fun of me. They said it was a girl’s car, but before long, they were asking to borrow it. “Please Dad, come on Dad, we love you Dad, we promise, we’ll keep it good, Dad, we swear Dad, next time we won’t throw our empty Busch Lights in the back, not a drop will be spilled Dad, we won’t even leave the surfboard wax on the hood, Dad, never again, no way.”
I figured if it survived my sons, it would live forever.
The night of the storm, it did not occur to me to park it on high ground. We’d lived on the beach for 30 years, through several hurricanes, and never had trouble.
NEXT PAGE »