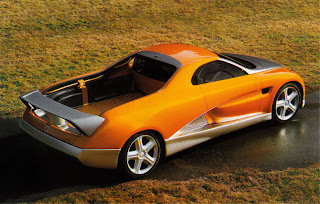 The car/pickup truck crossover has long been a revered combination of fun and usefulness. It’s popularity hit a peak in the US with the El Camino – which ended production in 1987 .  But in places like Australia the combination of car up front and pickup truck out back has continued, with vehicles like the Holden Ute still being manufactured today.
Back in 1998 the Italian design firm Bertone thought they’d have a go at making something which could be considered the next-generation El Camino. The Bertone Pickster was presented to the world at the 1998 Geneva Motor Show, where it displayed a striking blend of low-slung GT car and pickup truck.

Impressively, the Bertone Pickster went from design sketches to a fully-operational prototype in just three months. The Pickster was based almost entirely on a BMW 528, and it was powered by a 3.2 litre straight-six which produced 320 horsepower. The massive 21-inch wheels were wrapped with run-flat Michelin tires – I’m guessing the ride was fairly harsh!
Despite the fact the Bertone Pickster concept was based on a BMW platform, its styling was more inline with Pontiac models of the time. In fact the grille could be straight off a Pontiac. Were Bertone hoping GM would be so impressed with Pickster they’d bring back the El Camino under the Pontiac brand?
The interior of the Bertone Pickster was typically nineties. A bit tacky looking with lots and lots of cheap looking plastic. The only areas of real interest were the unusual seats. The seats were split into five different sections including two base sections which were separated down the middle.
As we all know now, the Pickster was one of the many thousands of prototypes which never made the transition from concept to reality.