I had an interesting thing happen to me yesterday, of a rather serendipitous nature---- which I am saving for a later post, btw, so for now, suffice it to say that....  it involves the original Batmobile which recently sold on Barrett-Jackson Auctions  ;) ------- but it got me thinking about the body work that will be needed on my project.

You can see some of it here:

Notice the dent in the panel surrounding the rear side marker light, and in the front driver's side quarter panel.    The front quarter panel also has some rust-through in the lower area.

OK, forget for now that sorry-looking paint and the surface rust all over the rest of the car.   We will get to all that.  Beneath that white 'frosting', as Steve K. has so cleverly termed it, lies an original Malaga 2002.  FWIW, the rockers and strut towers are solid.  I haven't taken a good look at the floor pans yet, but I am not too worried, frankly.

Anyway, back to those dents.  Monday night I pulled out my set of largely unused body tools.  I removed that side marker light, and within a few minutes, I had pounded most of that dent back into proper shape.  Not perfect, but close enough to know that with a little more work, it would look pretty good.

The front quarter panel is more of a challenge.  I decided to pull it off to work on it. 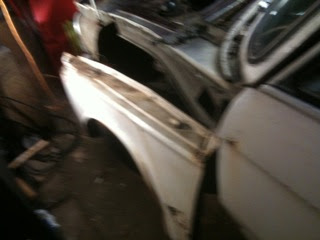 1) The first thing I noticed was that this panel was only held on by about 1/2 of the original bolts.  Hmmm.  This panel has been removed before for some reason, and only haphazardly re-installed.  2) It has a couple of rust through holes near the bottom of the panel.  Coupled with the dent, it raises the question of whether I should just replace the whole panel with a new one, rather than try to save this one.  But I can hold off on that decision for a bit because.... 3) at the very least, it makes a great panel for me to use to practice on:  to see how well I can beat that panel back into shape;  and if that works, then I may break out my new small welder.... cut out that rust area and.... teach myself to weld!  YES!  :)  Not to mention a panel to practice.... wait for it..... PAINTING! 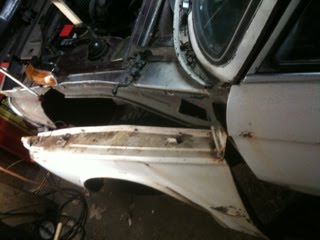 Anyway, that is where we stand as of tonight.  Lots of work ahead, lots to learn, and loads of fun to come!!  Bring on da noise!