This article appeared in Market Watch today, published by the Wall Street Journal.  Although there is no Baur content, we thought that this may be of interest to our readers.  Enjoy.  -------- Editor. 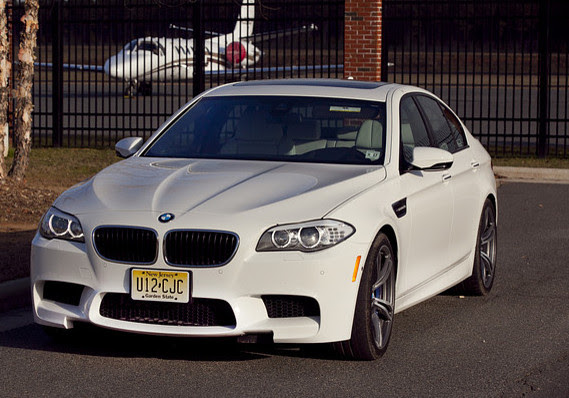 Dan Neil/The Wall Street Journal
In the 2013 M5, BMW has built a car effectively too amazing for American roads, writes Dan Neil.
Building a car, any car, is uncertain work. Witness the drumbeat of recalls issued by manufacturers year after year. That’s why car makers spend a lot of money on testing and validation. And the more heroic the automobile, the more extreme must be the testing, because you can’t—you just can’t—let a customer down with a cracked lower A-arm or overheated rear differential on some godforsaken track day.
No, with cars like BMW’s XE:BMW +0.45% new M5—or as I like to call it, the Kraken—management is obliged to order up more bulletproofing.
Here is a list of syllables I’ve uttered while checking the speedometer in the Bavarian company’s new 560-horsepower, 190-miles-per-hour supersedan: J’aah! Gawwwwwddd. Nooo! Like its rivals in the factory-tuner sedan wars—the Mercedes-Benz E63 AMG S-Model, the Audi RS6, the Cadillac CTS-V, the Jaguar XFR-S—the M5 is a breathtaking, world-blurring outrage, a fast car for real nutters, people whose egos generate their own weather.

Munich’s latest exercise in supercar performance offers buyers just about everything: lose-your-toupee cornering; laugh-out-loud acceleration; stupendous braking; a big ugly aero chinstrap; wheels for days; an entire mien of strapping; extreme physicality. This is how the Germans do phallocentrism.

Unlike those other cars, the M5—a 5-series extreme makeover by BMW’s in-house M division, with a twin-turbo V8 replacing the previous V10—marries tempestuous performance to a weirdly calm and deceptive disposition, a quality of deep mechanical serenity that almost seems like boredom, at least until the cops pull you over. Munich’s latest exercise in supercar performance offers buyers (about 2,000 per year, globally) just about everything: lose-your-toupee cornering; laugh-out-loud acceleration; stupendous braking (15-inch front discs with radial-mounted, six-piston monoblocks); a big ugly aero chinstrap; wheels for days; an entire mien of strapping; extreme physicality. This is how the Germans do phallocentrism.
I only wish it didn’t feel so unfulfilled at American highway speeds. To drive this car is to know what King Kong’s jailer felt like.
Let me hit you with some numbers, courtesy of our friends at Car and Driver: 0-60 mph in 3.7 seconds; quarter-mile in 12 flat; 0-150 mph in 18.3 seconds. I’m pretty sure this $90,000-plus, 4,387-pound, five-seat executive saloon is quicker, and would be faster in one lap around your average road course, than a Ferrari F430. I’m no theologian, but somebody has got to go to Hell for this.
The problem is obvious and well-known to BMW, and has been for quite some time: By the time the M division fortifies its 5-series with, for instance, an entirely new set of alloy suspension links, springs and dampers, all tuned like a violin; a pallet’s worth of additional structural reinforcement, a heavy-duty differential cradle, and bespoke front and rear subframes cast in the priciest unobtainium; a sick-with-torque twin-turbo V8—oh, my God, Hillary Clinton doesn’t have this kind of pull….
By the time they do all that, and then test it over and over to make it as safe and reliable as they can, they have built a car effectively too amazing for American roads, an offshore powerboat in a bathtub, a falcon in a gilded cage.
You simply cannot tax this car within our national borders. Please, go for it, roll into that sweeper without touching the brakes. The M5’s adaptive steering system—hydraulic and not electric-assist, as in the regular 5—reacts as fine as a bee’s wing, firm and exact. The 20-inch front tires bite and round you go. There’s a slight moment when, if the chassis were going to roll, it would have. But now the car is carving a radius, shoulder down, dead still. Get back on the gas. The weight transfer subtly settles the rear end. The M5’s reinforced active locking and torque-vectoring rear differential (the Active M-Differential) brilliantly adjudicates traction between the rear wheels.

The engine muscles the car from 60 to 100 mph in a mere 4.3 seconds; but it happens so effortlessly, and with such purling civility, you may not even notice. The authorities certainly will.

The remaining variables are, first, where all the multimode dynamics switches are set (steering, dampers and throttle systems each offer algorithms for Efficient, Sport or Sport-Plus). The computers will then inform the powertrain as to the precise amount of torque required, wheel spin and yaw rate. Now, Mein Herr, how sideways would you like to go? Press the gas a little for a little, a lot for a lot.
At this moment, you’re probably calling on only about three-tenths of the car’s capacity.
You might be thinking, well, what about driving the car on track? That takes us to what is certainly the M5’s Achilles’ heel: tire wear. Yes, BMW’s mega-sedan might be faster than a 3,300-pound Ferrari in one lap, but the car’s heft (just under 4,400 pounds, 200 pounds heavier than the previous M5) would make quick work of a set of Michelins, to say nothing of brakes.
The strange truth is, the M5 is too heavy for the track and too fast for the street.
In this respect, and this respect alone, was the previous M5 better: Fitted with a hilariously rough, lurching sequential gearbox (the SMG) and a naturally aspirated, 5.0-liter 500-hp V10 that spooled to the skies (8,200 rpm), the former M5 was a pretty lurid sport-driving experience. You knew you had ahold of something.
Strangely, the M5’s drama has declined even as the car has gotten quicker, faster and more refined. Inevitable, I suppose.
Let’s do some hardware. Under the hood is a blazing tuneup of the company’s twin-turbocharged 4.4-liter V8, which if it were any smarter would achieve consciousness: direct injection; dual twin-scroll turbochargers (21.8 pounds per square inch of boost); variable valve timing and lift (BMW’s “Valvetronic,” which speeds air intake by eliminating throttle-body butterflies); and a lot of other standard hot-rodding gear, like enlarged double-walled headers, oversize air-to-water intercoolers and a raised compression ratio.
This engine is an almighty five-alarm fire of torque, generating 502 pound-feet from a whispering, diesel-like 1,500 rpm all the way to 5,750 rpm. Mated to a reinforced version of the company’s seven-speed dual-clutch automated manual transmission, the engine muscles the car from 60 to 100 mph in a mere 4.3 seconds; but it happens so effortlessly (see above re: torque and multiplicity of gears), and with such purling civility, you may not even notice. The authorities certainly will.
So, no surprise, a car built and validated for extreme autobahn service feels a little disengaged in the U.S. You could always move, you know? Meantime, the price of driving the M5, in addition to the $90,200 MSRP, is eternal vigilance.
http://www.marketwatch.com/story/bmw-m5-too-smoothly-outrageous-for-america-2013-02-02
Posted by tom82baur at 4:45 PM