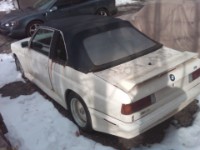 The primary purpose of this blog is to locate and identify all the Baur TC1s in the US.  In the process of doing that, we have come across several cases in which the same car keeps popping up in different places, effectively tracing it through several owners... giving it a little history, and a sort of unofficial provenance.  Part of the reason this is happening, of course, is because we are talking about a finite number of cars that have an unusual appearance, thus increasing their chance of being noticed.  There aren't that many Baurs in the US to begin with, so the more we look, and the more people we have acting as our eyes and ears, it is perhaps not all that surprising that we should have multiple sightings of some of the same few cars.

One of the techniques we have used in our searches is similar to the technique known as 'skip-tracing'.  Wikipedia gives the following:  "Skiptracing is done by collecting as much information as possible about the subject which is then analyzed, reduced, and verified. Sometimes the subject's current whereabouts are in the data, but are obfuscated by the sheer amount of information or disinformation. More often the data will be used to identify third parties that might be able to assist the process."  Think Dog the Bounty Hunter.  ;)

Of course, in our 21st Century version of skip-tracing..... we just Google everything!  MUCH easier!  :)

That is exactly how we were able to uncover some great info on Baur #471, the widebody owned by 'vev', a Bimmerforum member.  It was originally thought to be a Dietel-modified car, but when that info did not pan out, the question arose as to who did the modification work?

He had a clue:  the letters:  "ASU", which he tracked down to being a reference to a former business called Auto Styling Unlimited, in Rockville, MD.  We were able, thanks to Google, to parlay that clue into the name of the former sales manager at ASU, now in another career, and living 200 miles away. We were able to contact him and .... Bingo!  This gentleman not only remembered the car and some of the modifications done nearly 30 years ago, but he gave the name and website of the first owner for whom the modifications were performed.  He also provided the name of another important BMW player in those days whose company did a lot of importing of BMW Euro vehicles, as well as custom suspension, performance and styling modifications. It was like stumbling onto the Motherlode!

So, thanks to some googling and 'skip-tracing', we have gone from having one inscrutable clue  to now having the names of three persons who were present at the birth, so to speak, and perhaps the beginnings of establishing some unofficial provenance for the wide body Baur!  Not too shabby for about a weekend's work for Team Baurhunter!  Great work, boys and girls!  There is still a lot of info to be discovered, but this is certainly a great start along the way!
Posted by tom82baur at 9:56 PM