The Baur in the Bush: The difficult we do immediately, the impossible takes a little longer. Motto of The US Army Corps of Engineers 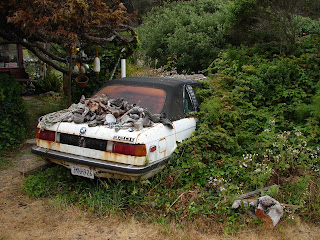 Well, in my last post I commented that it would be pretty amazing if we were to find the forlorn Baur in the Brush. Within about 36 hours of that post, Tom D, bimmerforums member from Monterey, CA, (and fellow Connecticut Yankee from way back) posted that he had gone to a satellite site, and had not only found the location, but he could see the car still in the brush.... Stating that it was pointed in a southeasterly direction. And.... It was not far from the road and the beach.

Most amazingly of all, he stated that last summer, he passed within 150 feet of that spot on a motorcycle trip! The satellite pic actually dates from May 2009. The original flickr pic was taken in 2007, and our Intrepid Baurhunter (Tom D) checked the California stickers on the plate: the plate appears to date from 2004. So it appears that the car was parked between 2004 and 2007 (date of flickr pic). Satellite pic in 2009 shows it was still there. There is a good chance that the car is still there now! Tom D has indicated that he may be able to take a trip up there in the next few months to check it out.

Tom D: Baurhunter of the Week!

Who would have thought that we could take a 4 year old pic pulled out of nowhere, and nail it down like this in such a short time! Ok, so we don't have it in hand yet.... But, day um. We are getting pretty close. What are the chances that one of our members would have been within 150 feet of this car within the last year? Amazing.

Thanks again to all, and thanks to you, Tom D! We may be able to salvage this one yet. Conkitchen is resurrecting one (check out his project in bimmerforums thread "Baur TC1 in the US".) Maybe someone can do the same with this one.

For the play-by-play, please check out the bimmerforums thread: "wanted: crushed or alive" ....which is where this unfolded.
Posted by tom82baur at 9:52 PM