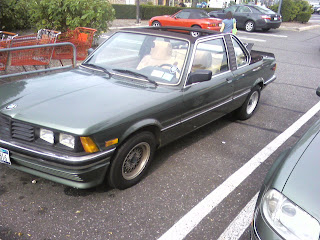 "http://markspizz.net/?p=424
This was a rare sighting – a 1981 BMW TC1, converted by Baur. I don’t know much about these 3 series convertibles, but it seems that they are pretty rare. I think this is an E21 model, but that bizarre grill is really throwing me off. Sighted in Merrick, NY. Feel free to update this with any information you may know."


Ok, the West Coast Baurhunters just found the proverbial needle in the haystack, by locating the "Baur in the Bush". An Amazing feat, for sure!

Can we mobilize Team Baur (East Coast Division) to accomplish a similar feat? Who knows??

Here is the challenge:

The quote above was posted in Mark Spizzirri's blog back in 2009.

This car was photographed in Merrick, Long Island in 2009. If it is the car we think it may be, it may have belonged to Christiane Baur at some point, according to Jeroen. Yes, that is Baur as in BMW Baur. Yes, THE Baur family. A Celebrity vehicle, of sorts.

This was Jeroen's comment on the original Bimmerforums post (Baur TC1 in the US thread, Page 6):
"I'm sure it isn't a US-car, because this colour (Zypressengrün-metallic 152) wasn't used on a 320i US. I also would like to know why this couldn't be a M20 320/6. Because these have also the single exhaust like the M10's.

From what I can make of it:
-Zypressengrün
-Brown roof
-Light interior (stoff pergament)
But then my problem: what colour are the (rear) windows? From what I can see, they are "not coloured" or brown. He also tells us that the car is from 1981. If the windows are not green-tinted, that would leave a single car. The 320/6 A72594. A car once owned by Christiane Baur."

Ok, well, email me or post it here somewhere.

Merrick is roughly between Hempstead (where American Sunroof Company [former Baur licensee] was located, btw) and the Jones Beach area on Long Island, NY. Hmmm... A beach resort area, warm weather coming.... If it still exists, it is gonna be out there sooner or later.

Only one way to find out for sure: let's find it! Keep your eyes peeled! :)
Good luck!

There is a pic of the car in the right column of this blog... 'Have you seen this Baur?". More pics on mark Spizzirri's website referenced above, and on the bimmerforums thread: Baur TC1s in the US, page 6.
Posted by tom82baur at 9:45 PM