Well, today I brought the '02 home from winter exile!  It has been sitting outside for a few months at a "safe house" across town, and  I have been driving my 1991 325ix for the winter.  Great car, btw.... just a beast in the snow!

But, now that the danger of a serious snowstorm has pretty much passed, it is time to get into summer mode!  The 1982 323i Baur (which can be seen top down in the background, along with my white 1977 320i) at the right, is once again my Daily Driver, and this 1973 '02 can finally get some long overdue attention!  ;) 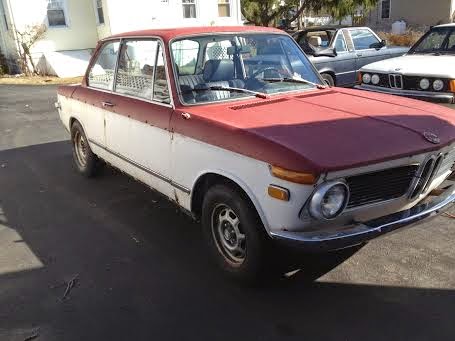 Incidentally, since this '02 has been sitting for several months without being started, I fully expected a flat battery.  I am please to say that I was waaaaay off!  I cranked it for about 30 seconds, and it started to fire, just as I turned the key off rather than overtax the starter.  I re-cranked it, and it fired right up!  I let it run for a few moments, and it quickly settled down to a smooth idle at about 800rpms.  Sheesh!  You can't ask for anything better than that from a 42 year old car! 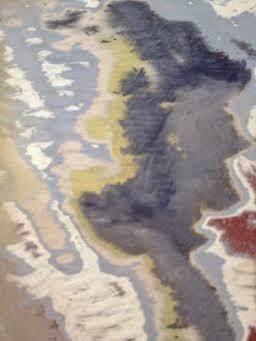 So I started a little prep work this afternoon.  If you recall, the original color of the car was Malaga.  But somewhere along the line, a previous owner hit it with a coat of white paint.... and not a very good job, btw.  My friend, Steve K., had quite cleverly dubbed it "Malaga, with a white frosting"!  As I did a bit of sanding on the trunk this afternoon, I discovered another color underneath!  You can see it in this pic:  red primer over the white 'frosting'; then a layer of grey primer which seems to be covering a layer of skim coating Bondo and then a layer of GREEN!  But where did that green come from?  My first thought is that at some time in the past this 2002 got 'slimed', a la Ghostbusters!, but I have no real proof of that!  No Malaga in evidence on the trunk, btw, so perhaps the trunk has been replaced!

I have since changed the look from the "Malaga with frosting" as you can see, to a two-tone, which --- although it is only primer--- I have grown to like a lot! 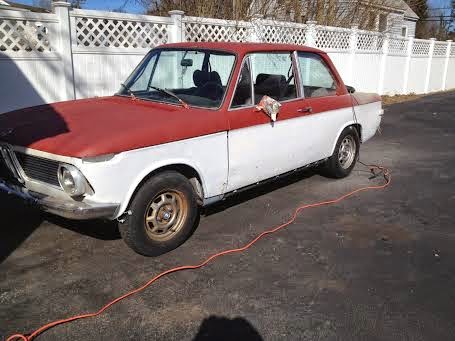 Here it is in my driveway this afternoon as I began to do some sanding on the trunk.  As you can see from the pic above, there are several coats of paint here.  But there is a lot of splitting and cracking in it, which seems to indicate some underlying problem, probably surface rust, at least.  I want to repaint it, so I decided to take it all the way down to bare metal.  I am not looking for this to be a 'Concours' '02, but I am planning to have a very special two-tone paint job, and so I want to have a decent base for it.  I consider this a "Tabula Rasa", and I look forward to making this a fun 'driver' project! 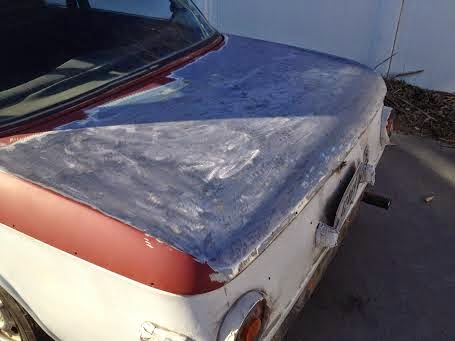 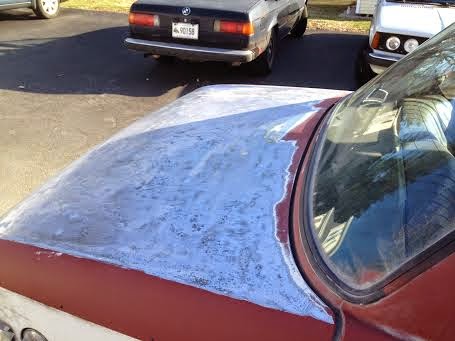 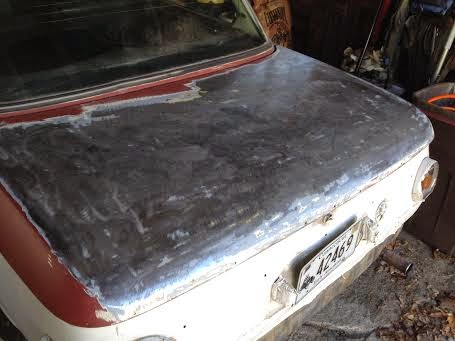 As you can see, I have removed most of the paint from the trunk, and sure enough, beneath all the cracking, there was a lot of surface rust.


I quit for the day at this point, so stay tuned for more updates!  This is a really fun "Tabula Rasa" project!  I can't wait to get back to it!