Two E21 Baur Owners In Connecticut USA.... the ONLY Two!

This pic was taken at the BMWCCA Connecticut Valley Chapter Annual Show and Shine 2012 at Wickham Park, Manchester, CT.  Those t-shirts were just officially introduced at the Vintage at Saratoga NY about a week earlier, and they sold out! 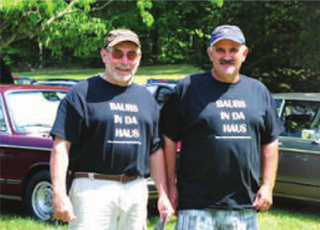 Tom Schuch (Baurspotting) on the left and Afonso C. on the right.  The only two known E21 Baur owners in Connecticut!  This pic appeared in Die Zeitung, the magazine of the CT Valley Chapter September/October 2012;  pic by Botond Pal. 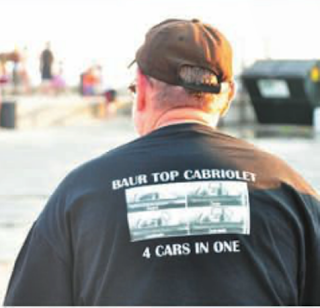 Reverse of the t shirt showing the Baur as :  "Four Cars In One"!  Coupe, 'Targa", Landaulette, and Convertible!  This pic is by Lance Johnson, taken at the Misquamicut BMW CCA Social with the Boston Chapter, June, 2012.

More on the only two known CT E21 Baurs:
http://baurspotting.blogspot.com/2011/07/two-e21-baurs-at-connecticut-valley.html

Baurspotting gear is in the works!  Stay tuned to learn more!