Well, folks, it is now June... a time when a Baur owner's fancy turns to.... well, nothing could sum it up better than this pic.  It was posted in Facebook about an hour ago by our friend and fellow Baur owner, Harry B.  The caption is that supplied by Harry himself: 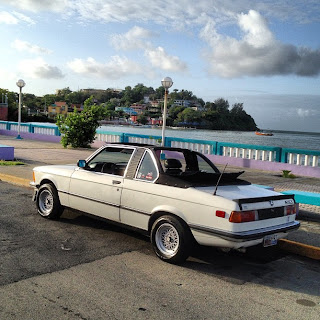 As long as we are on the subject of Harry and his Baur, I thought this might be as good a moment as any to honor Harry with a post about his Baur.  So, here are a few more pics that we have had in our files for a while.  Harry has been planning a refresh of his Baur, including a possible engine swap and a perhaps a paint job, but i am not sure where he is in that process at the moment.  Perhaps Harry can fill us in when he gets a chance.  I will update this post to reflect any new info.  You may recall that Harry was Baurspotting's "Our Man at the Vintage" in 2012, and also posted a ton of pics from the Vintage 2013 that we featured here.   Links to those are at the end of this post.  Thanks again, Harry!

Harry and I have never actually met, but we have established a bond of friendship over the past several years in our correspondence through the various BMW forums, Baurspotting and some common interests:  our shared love of cars, (especialy BMW and Baurs), our families, and, of course, bacon!  I look forward to meeting him in person one of these days!

This one's for you, Harry!

From The International Baur Registry

HarryPR in his own words:

Here's my latest toy, a 1981 BMW 320/6 Baur TC1. I bought this car in Lawrenceville, GA and keep it in Atlanta for use when I go there. It is basically stock, with a 2.0 liter carbureted M20 engine and five speed transmission. The wheels are 13" x 6" BMW Motorsport wheels, which were optional on E21's.
Its original color was Kastanienrot, but was painted Alpineweiss by a previous owner. My plans are to fix all the mechanical issues, enjoy it for a while, and then decide whether I want to restore it to its original color. ------Harry B. 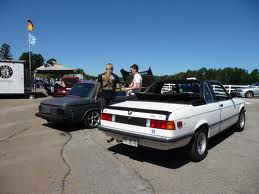 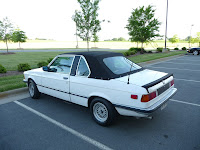 Harry and his wife arrive in style!  Love this pic! 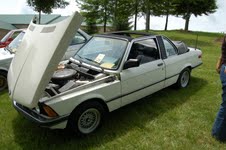 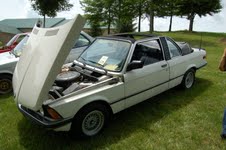 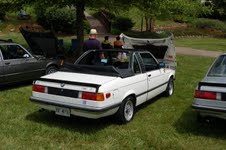 And there is The Man himself!

Once again, HarryPR, in his own words:

Well, the Baur finally arrived in Puerto Rico on 5/26/11. I drove it from Deltona to Jacksonville, FL, where it was loaded on a barge and shipped to the island.

After paying freight ($1100.00) and excise taxes ($800.00) on the day after the car arrived, I took a drive across the island and back on Sunday May 29 to the Exotic Car Show in the town of Anasco. People there  liked the car and asked many questions about it, since it is now the only known E21 Baur in the island.

Here's the obligatory pic of the car at the show: 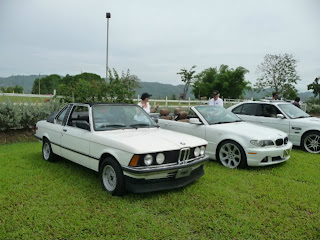 
The text above that appears in red are the words of Harry B. from various sources.

Links to other posts with Harry:
http://baurspotting.blogspot.com/2012/05/harrypr-our-man-at-vintage-old-salem-nc.html