This is the driver"s seat that came in the 1973 2002.  The previous owner said that the original front seats had been replaced with this Recaro (below) and a comfort (non-Recaro) seat for the passenger side.  I thought he said one was from an E30 and the other was from an E21. 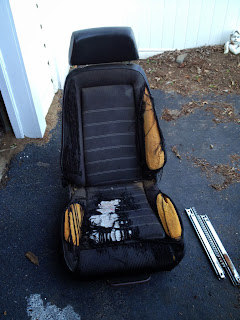 As you can see, the fabric on this Recaro is in pretty rough shape, although the cushions/bolsters are really pretty intact.  I originally thought that this one was an E30 seat, but after pulling it out, I can see that it is actually a pretty close match for the E21 Recaro that I have in my 1982 323i Baur.  That was a pleasant surprise, btw!  You may also notice that it is actually a passenger seat, not a driver's seat, based on the location of the seat back adjuster and the tilt lever.  Oh, well.

At any rate, I pulled it out today, and, where I was originally going to dispose of it.... I may now decide to hang onto it.  I may recover it and reinstall it either in the '02, or perhaps one of my other cars. 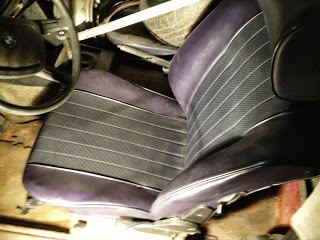 I originally bought that E21 on ebay just for the interior, which I planned to swap into my 1979 323i Euro project car.  It has been several years, though, and that project has been superseded by several others, (including the present one) and so it is currently on a back burner.  And, since I am  currently looking at downsizing the fleet..... there is a strong likelihood that that 323i project may instead become a parts car for the Baur.... or I may just part it out.  Nothing definite yet, but the time is drawing very near.  Some of my cars simply have to go, and this 323i is a prime candidate.  Stay tuned!

Anyway, this seat went right into the '02.  I simply had to switch the slider rails from the Recaro to this seat, and bolt it in.  Very straightforward swap.

Once I got it in, I noticed that .... in the rather dim and fading light, so I could be wrong here, that this replacement seat seemed to be a very close match for the passenger seat!   I want to get a better look at it in the daylight before I say for sure, but it does appear to be a very similar blue color, and a matching pattern.  That might save me from swapping out another seat but....we shall see.  ;)

Incidentally, the 1973 '02 did not come with a back seat ---none! .... which made it easier to transport the six extra tires that came with the deal!  However, I would like a back seat in the car!  I am told the E21 rear seats are a pretty direct fit, so I have also pulled the back seat cushions out of that 1978 320i, and I will be installing them in the '02.

All of the above, btw, is not intended as a permanent solution but, rather, an interim solution to help me get the '02 on the road.  The seats are blue, the door cards are black (at least the ones that are installed!), and the exterior is ..... well, in transition!  I just want to get it operational for now, and I will have plenty of time to sort out the .... ummmm...  aesthetics.

I have not registered it yet, although, if all goes according to plan, I will be making the dreaded visit to CT DMV tomorrow afternoon.   That will give me the opportunity to actually take it out on the road for a shakedown cruise before the Nor'East 02'ers CT drive next week.  If all goes well, I hope to debut the '02 on that drive, but I want to make sure it can actually complete the course successfully.  I don't need to be the guy that comes home from the Maiden Voyage on the back of  flatbed!  :)

Bear in mind I have only driven this car up and done my driveway a few times, and I have never even put it in second gear!    I THINK it may be ok, but that may just be naive optimism on my part.  If I am able to get it registered tomorrow, then I will have about a week to work through any issues that show up.

If I am unable to gt the '02 ready in time for the drive, it is really no big deal---- although I would love to do it!  I can always take the E21 Baur, which is always a fun ride, and my daily driver.