Today's Winston-Salem Journal, thanks to a link from Humberto M.!

by Cindy Hodnett
Cars, scholars and a favorite annual garden party are just a few of May’s wrap-up events. Lots of celebrities have been coming to town this month, enjoying cool weather and Carolina blue skies.
Vintage at the Vineyard
Westbend Vineyard had hundreds of BMWs dotting its landscape last Saturday for the 10th anniversary of The Vintage, described by organizers as a “national gathering of vintage BMWs.” However, the description might soon be revised, since there were several international license plates among the mix.
Scott Sturdy is the man who makes the Vintage happen every year. He and his wife, Patti Sturdy , were busy welcoming participants and their beloved automobiles at the Lewisville venue, as well as pointing out a few of the must sees.
“We have more than 300 cars here this year,” Scott said. “And you have to see the silver race car under the tent – it’s a million-dollar car.”
Author Rob Siegel from Roundel magazine came to the Vintage with his 1973 3.0CSi. Siegel signed copies of his new book, Memoirs of a Hack Mechanic, and talked about parts of the book that might surprise people.
“I have a chapter in the book titled ‘Why Men Love Cars,’ and it offers insight into the mind of a car guy,” Siegel said. “Cars are useful to men as objects of passion in a way that’s difficult for women to understand. But it’s also healthy and constructive in terms of long-term relationships. It’s maintaining passion within a sane set of boundaries.”
A lot of women brought their Bimmer babies to the Vintage.
“I’ve been to this event every year,” said Melissa Rickman, who brought her 325i E30 and attended with Jedediah Bowers . “I spend my vacation going to car shows.”
Marva Richardson and Calvin Henderson came from Raleigh and Atlanta, and Paul , Claire , Sihua and Jade Pan drove their 2002 from New York.
“He just bought it and is restoring it,” Sihua said.
Amy Lester has a 1972 3.0CS.
“My husband and I restored it,” Lester said. “He’s a former British car enthusiast.”
Billy Reavis of Motorsport Connections was on site, along with his kids and employees, Katie and Kasey . Reavis is the go-to guy for many local BMW owners, and many drive a long way to have him work on their “babies.” 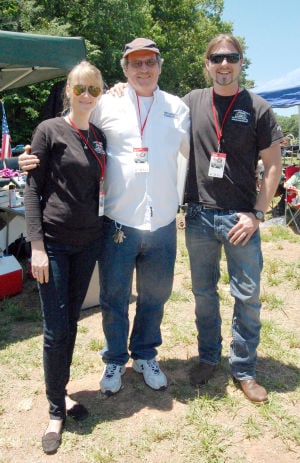 May 25 Vintage at the Vineyard -- l to r -- Katie, Billy and Kasey Revis
“There are things worse than drugs, and one of them is called racing,” Reavis joked, explaining how he started his company. “I used to work at night on other people’s cars to make spare money for my racing habit and finally decided to open my own shop. It’s been uphill ever since, and we have folks that come to us from all over the East Coast.”
Susan Marshall came from Virginia with Tom Schmit .
“I came the first year of the show,” Marshall said. “I like showing my car, and it’s so fun to drive your car when you have one of these.”
http://atthevintage.com/