Baurspotting has previously done a number of posts on the famous 2002ti Dianas.  (See links below.)    I came across a couple of new pics today, so, rather than just add them to the other posts where they may be overlooked,  I thought I would give them their own featured post! 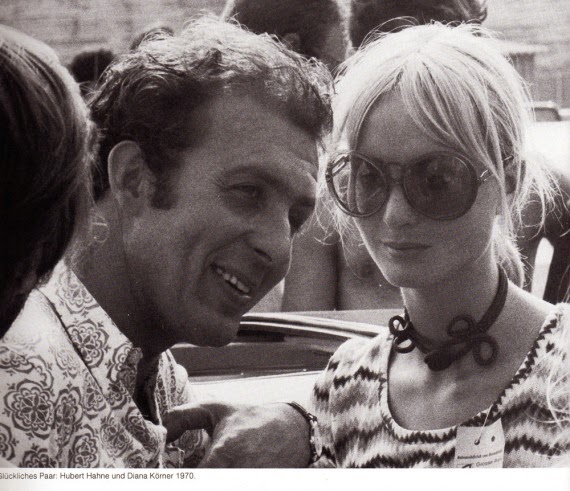 First up is this gorgeous black and white pic of Hubert Hahne and Diana Korner from 1970.

"Hubert Hahne, racing driver and BMW agent based in Dusseldorf presented one to his wife as a wedding present – ‘Diana Korner’ who was a German actress at the time. The “Diana” was a BMW 2002Ti with special equipment. Hahne decided then to carry out a small series of 12 cars, with the agreement of BMW, all painted of different colours, some with turbo engines or 6 cylinders. It is interesting to note that the numbers of chassis’s, as these cars are all successive, proving well that the Diana’s were not an official model in range BMW, the firm brought Hubert Hahne the necessary logistical support for the realisation of this very special series. These “Diana’s” were also equipped with steel sliding roofs, racing bucket front seats, electric front windows, 5-speed gearboxes, racing door mirrors, top tint front windscreen, twin headlamp upgrade, dashboard and panels on the doors covered out of deer."
http://www.bmw2002.co.uk/history-of-the-02/the-bmw-dianas/

I believe there is an error in that text, btw.  Hahne's personal 'Diana' had a 6 cylinder engine, but the rest of the Dianas had M10 ti engines.  None were turbos. 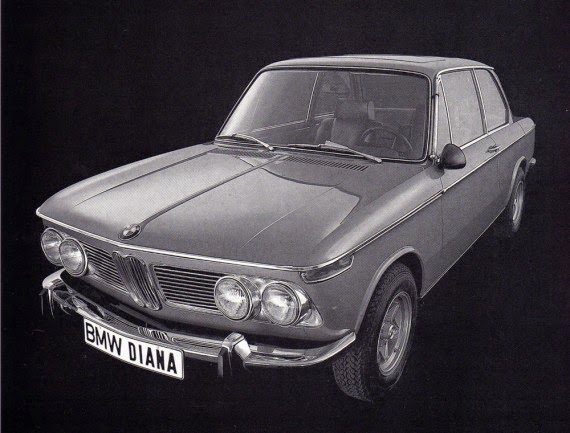 This is a pic of the Diana that Hahne presented to his wife as a wedding present.

If you are not familiar with the Diana story, here is a short summary from the Macartney 2002 book:
Retired BMW racer Hubert Hahne became a BMW dealer in Dusseldorf.He had bought his wife the actress Dianna Korner a specially equipped 2002 as a wedding present. The car attracted considerable attention. So Hahne was persuaded to make a luxury edition of the 2002Tii, with BMW's permission.These 12 cars 1 690 201 to 1 690 212 were all different colors and had different interiors, non of the colors were standard 2002 colors. The conversion work was done by Baur.Diana specs. Electric sunroof- Leather upholstery, Recaro front seats.Black vinyl headliner. -Velor carpet and boot lining- Leather binding for the carpets.-Black vinyl lining for the boot lid.- leather gaiters for the gear lever and handbrake.- chromed handbrake lever- aluminum tread plates on the door sills- Front and rear overriders- Becker stereo radio- laminated windscreen- heated rear window- ammeter and clock- special silver grille- twin headlamps - chromed covers for the bumper bolts- special exhaust-sebring type driver's side mirror.Hahne introduced the Diana in the spring of 1971, at a price of 22,500 DM; almost twice what a standard Ti cost. the first 5 sold quickly- the last sold at the end of 1971. http://www.amazon.com/BMW-02-Restoration-Guide-Brooklyns/dp/1855204517/ref=pd_cp_b_1/184-9269085-6601248 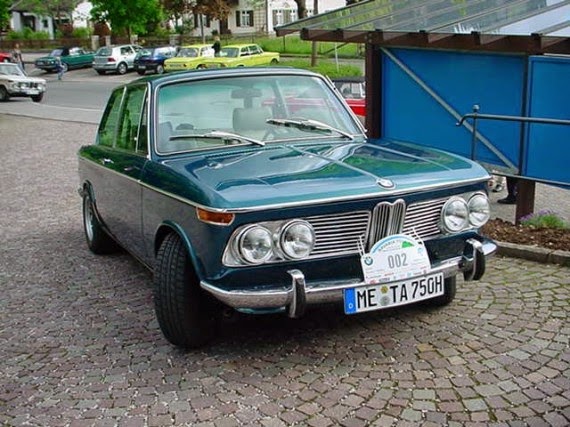 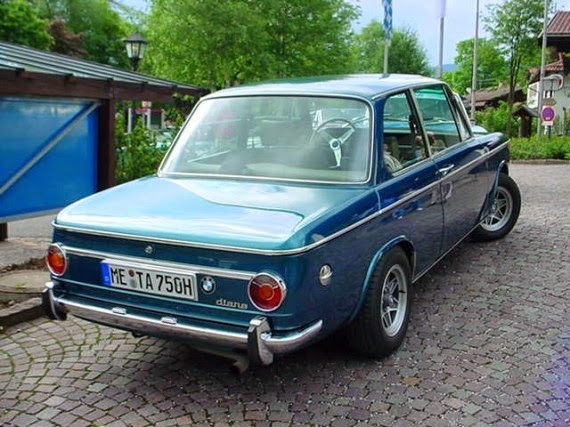 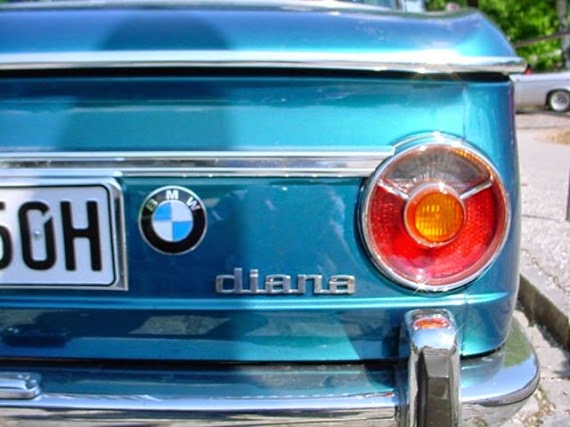 The three pics above are the Diana owned by Andy Andexer, who at one time was the Chairman of the 02 Club in Germany. 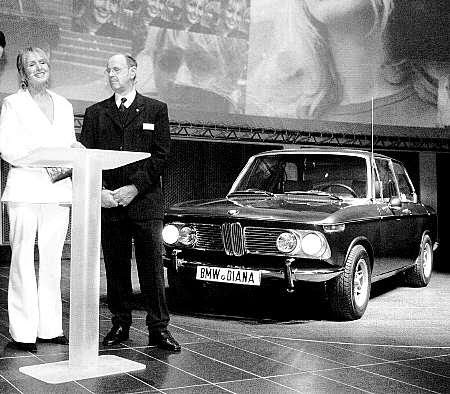 This is another pic of Diana Korner with her namesake Diana, and according to Lars in 2002FAQ, she is standing with Andy Andexer.  I do not know the occasion for this pic.

Here are the links to our previous posts about the BMW 2002ti Dianas by Baur: