From time to time we like to take a little detour here on Baurspotting to share some of our other interests that may, or may not involve BMW Baurs.  This is one of them, folks.

Baurspotting had the distinct pleasure of meeting Rhonda and Sparky Rucker at a house concert on 4/14/2013 in Connecticut.  Some of our readers may be aware that that I have a strong interest in the Civil War in general, John Brown and Abraham Lincoln, in particular.  Harpers Ferry WV is one of my favorite places on the planet.
My wife and I had a special treat this weekend:  we attended a local house concert that featured two of our favorite performers, Sparky and Rhonda Rucker.  Their show was great, as always, earning a standing ovation from an enthusiastic, foot-stomping and appreciative audience.  Guitars, banjos, spoons, bones, organ and mouth harp.... a great show!  The set list included selections from Blind Willie McTell (Statesboro Blues, like you have never heard it), Robert Johnson, and Leadbelly, not to mention original compositions and storytelling, effortlessly weaving together the music with folklore, stories of Emmett Till, Rosa Parks, and Rev. Dr. Martin Luther King, Jr., and personal accounts of coming of age in the South during the 50's and 60's.   The stories rekindled some vivid memories for me, having spent my college years in the tumultuous late 1960's and early 70's in Washington DC, through the assassinations of Dr. King and Robert Kennedy, and witnessing the declaration of martial law in DC.  Unforgettable scenes of Capitol Hill outlined in flames.  Not to mention King's Poor People's Campaign, which occurred shortly after his death, and the turmoil arising from the Viet Nam conflict.  It was an amazing time to be in DC.  I was fortunate to have the opportunity to share some of those memories with Sparky afterwards. 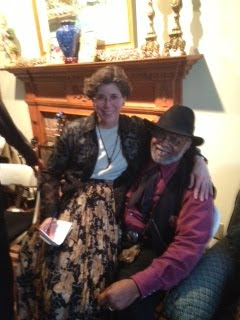 "Sparky and Rhonda Rucker perform throughout the U.S. as well as overseas, singing songs and telling stories from the American folk tradition. Sparky Rucker has been performing over forty years and is internationally recognized as a leading folklorist, musician, historian, storyteller, and author. He accompanies himself with fingerstyle picking and bottleneck blues guitar, banjo, and spoons. Rhonda Rucker is a musician, storyteller, author, and songwriter. Her blues-style harmonica, piano, old-time banjo, and bones add musical versatility to their performances.
Sparky and Rhonda are sure to deliver an uplifting presentation of toe-tapping music spiced with humor, history, and tall tales. They take their audience on an educational and emotional journey that ranges from poignant stories of slavery and war to an amusing rendition of a Brer Rabbit tale or their witty commentaries on current events. Their music includes a variety of old-time blues, slave songs, Appalachian music, spirituals, ballads, work songs, Civil War music, cowboy music, railroad songs, and a few of their own original compositions.

In addition to being wonderful musicians and performers, they are two genuinely nice folks.  It was a pleasure to hear them again, and to spend a few minutes chatting with them afterwards.  We also picked up another of their CDs, btw," Let Freedom Ring".   Another of their CDs, "The Blue and Gray in Black and White", is also highly recommended. Great versions of a number of classic songs from the Civil War era. 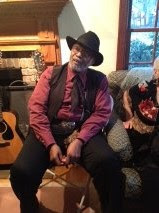 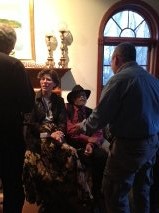 Baurspotting meets Sparky and Rhonda Rucker at a house concert 4/14/2013.
(L to R: Rhonda, Sparky and Tom, back to camera.)