Vatican Times: They Are A'Changin'! 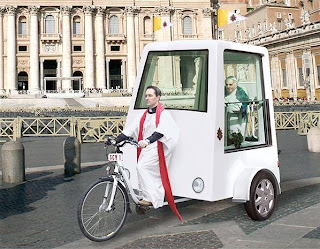 Hot on the heels of the installation of Pope Francis, a press release emerged from environmentally-friendly insurance firm ETA with details of his new mode of transport. It claims that the new Pope is about to take delivery of a pedal-powered Popemobile costing £175,000.

Apparently, the eco-friendly vehicle has solar panels, low voltage spotlights “to illuminate His Holiness” and a top speed of 6mph – depending on who’s pedaling.
|

If you didn’t smell a rat already, news later in the release that the plans were set to receive final approval on Monday 1st April 2013 gives the game away. Austere times call for austere measures but the pedal power Pope is beyond a joke.