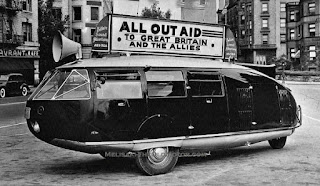 Whoa! That is NOT a misprint!  Rear wheel STEERING!

Thanks to The Old Motor and Hemmings Motor News for the following articles.

Dymaxion : The Car for a Future That Never Happened Dymaxion No.3  somewhere in the America during World War II


Architect, author and futurist R. Buckminster Fuller’s name is probably one of the most recognized in both the field of design and the popular culture. Starting with the widespread publicity surrounding his geodesic domes in the 1960′s, and continuing to the appellation of a newly discovered form of carbon (Buckminsterfullerenes or “buckyballs”), few advanced thinkers have maintained such high visibility over the years. But while some his unique ideas about static structures and systems gained widespread acceptance, his solo venture into automotive design didn’t fare as well. Fuller coined the word “Dymaxion” to describe a global concept of design by combining the words dynamic, maximum, and tension. When he applied the concept to the “modern” motorcar, the result is seen here. Visitors to the 1933 Century of Progress Exposition in Chicago (thumbnails, left and center, above) were undoubtedly very impressed, but Fuller was not alone in exploring aerodynamics as means of increasing automotive efficiency. The (third thumbnail above) shows his second design which was never built. Indeed, there was a mini-movement of teardroppers and streamliners at the time, but his was, without a doubt, the most radical. Patent drawings (thumbnails, below) show the unusual rear engine-front wheel drive arrangement.
Three were eventually built, beginning in 1932, with a fourth one planned (see right thumbnail, above). But the very radicalism that drew fair goer’s (and later War Bond buyer’s) attention proved to be it’s downfall. Virtually all the others used conventional front wheel steering. The Dymaxion steered from the single rear wheel, and while it’s close to 180 degree rotation made it very maneuverable (watch the video below), as you might expect it became increasingly unstable and difficult to drive as speed increased and thus impractical for use as daily transportation. Many more photos of this very famous automobile can be found at Future Car, along with another short film. You can read about and also see the patents  in more detail and learn more about this man himself at the Buckminster Fuller Institute.

Photos courtesy National Automobile Museum.
For years, it didn’t look like much. Sure, Dymaxion No. 2 – the only remaining streamlined car of the future built by Buckminster Fuller – was on display at the National Automobile Museum in Reno, Nevada, but it didn’t run and its interior was so unpresentable, the museumhad blocked off its windows. Then for the last three years, visitors to the museum didn’t see it at all. But now it’s back, looking better than ever after a recent restoration, and the museum intends to get it running in the near future.
Buckminster Fuller could probably best be described as a designer, but even that term fails to capture the totality of his interests. Best known as the creator of the geodesic dome, he also pursued poetry, art, mathematics, and for a brief period during the early 1930s, car design. Concerned primarily with minimizing waste and maximizing space, Fuller designed a streamlined and fully enveloped car in a reverse trike configuration with the Ford flathead V-8 engine in the rear and front-wheel-drive. The single rear wheel steered the car and thus allowed the Dymaxion a turning circle diameter of its own wheelbase. Financed by his friend Anna Biddle, Fuller formed the 4D Company and hired yacht builder Starling Burgess to engineer and build the Dymaxion. In 1933 or 1934, Burgess turned out three in the old Locomobile factory in Bridgeport, Connecticut, and Fuller took them on the road to extol their virtues: a claimed top speed of 120 MPH and up to 30 MPG, both largely due to the Dymaxion’s streamlined shape and aluminum-over-wood construction. Fuller apparently intended to enter production with the Dymaxion, but a highly publicized fatal accident at the World’s Fair in Chicago put an end to those plans.

Of the three Dymaxions (Dymaxia?) built, the first one, the Chicago World’s Fair car, was later rebuilt, but was later destroyed in a fire. The third one was sold to conductor Leopold Stokowski, but then disappeared after World War II, possibly in a Korean War scrap drive. As for Dymaxion No. 2, nobody seems to be sure who originally bought it, but the earliest known owners were a Bridgeport couple who sold it for $1 in 1950 to Theodore Mezes of Mesa, Arizona. Mezes left it out in his backyard to deteriorate until 1968, when a trio of University of Arizona engineering students recognized the Dymaxion during a lecture. The three students initially offered Mezes $1,500, but convinced they were about to be outbid by Bill Harrah, they raised their offer to $3,000 and bought it. Over the next decade, they loaned it to museums before selling it to Harrah in 1978 for $20,000. It remained in the Harrah collection until his death, and then was transferred along with a portion of Harrah’s collection to the National Automobile Museum collection.
The recent impetus for the restoration of Dymaxion No. 2 came from British architect Lord Norman Foster, who has said that he worked with Fuller for the last 12 years of Fuller’s life. Fuller Foster hired British restoration house Crosthwaite and Gardiner to build from scratch a fourth Dymaxion, one patterned on Dymaxion No. 2, and, while they were at it, to perform a cosmetic restoration on No. 2 that would include a new interior. Foster’s replica – painted green with a white roof and sporting a stabilizing fin – debuted in 2010, but Dymaxion No. 2 didn’t return to Reno until recently.

Becky Contos, the sales and marketing manager for the museum, said that they plan to hold a full roll-out of the Dymaxion as soon as next summer, but that depends on how soon the museum can complete the mechanical aspect of its restoration. “The problem is not just money, it’s also literally finding the parts and pieces we need,” she said. For instance, the museum is looking for a 1934 Ford flathead V-8 engine in working order. Anybody who can provide such an engine is encouraged to contact Jay Hubbard at the museum at 775-333-9300 or info@automuseum.org
http://blog.hemmings.com/index.php/2012/12/20/dymaxion-returns-to-national-automobile-museum-after-restoration/

Be sure to check out these videos!  Buckminster Fuller himself talking about the Dymaxion;  Amelia Earhart; the Dymaxion in motion!
http://www.youtube.com/watch?v=-M8LMq8ulBA

How about the Dymaxion House!
http://www.youtube.com/watch?v=Vx5VJ1yd3HQ