My project his weekend is to deal with a squealing, and, as of Thursday, a leaking, water pump in my 1982 323i Baur.  You will recognize that, since it is a 323i, the engine is the M20, which requires a periodic replacement of the timing belt as a matter of routine maintenance.  BMW recommends the M20 timing belt replacement every 4 years or 50,000 miles.

However, I have noticed in increasing squeal when driving.  At first I thought it might be the fan belt, and I have adjusted it several times.  Last Thursday when I got to work, I was aware of a peculiar sweet smell as i walked from my car to my office.  It is always a good idea, by the way, to give your car the 'sniff test' periodically.  Check around the car for any peculiar smells or evidence of any leaking fluids.

Sure enough, this time the sniff test paid off;  I could see that I was losing a small amount of coolant from somewhere near the front of the engine.  Anticipating this eventuality, based on the squealing sound, I had ordered a new timing belt, tensioner, and water pump from Bavarian auto a few weeks ago, and I was just waiting for the opportunity to do the job.

This weekend is the opportunity.

I am also trying to get my taxes done this weekend, btw, so I didn't actually get out to the garage until late this afternoon.  Now, you may recall that my one-car garage is presently occupied by my 1973 2002 project car.  So the first thing  I had to do was swap the cars around.   The 2002 is missing the window seals on the driver's side, so I put it under an old car cover, and I hope to be done with the timing belt before we get any serious rain.

Anyway, this afternoon I set to work to replace the water pump.   As long as I am in there, I will replace the timing belt.  Here you can see that I am well into the project, and I have just removed the old timing belt before breaking for the night.

I used this write up as a guideline, but since it is written for the E30 325i, it is not totally accurate.
http://e30world.com/engine/BMW-E30-timing-belt-and-water-pump 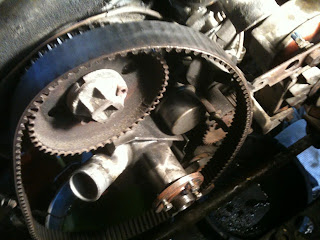 Tomorrow I will remove the old water pump, install the new one, reinstall the new timing belt... and I will hopefully get my taxes done.  I haven't yet decided if I will do them in that order, or not.