My project for today consisted of removing the old convertible top and frame from my 1989 325iC, and replacing it with the top and frame that I purchased and had delivered this week. 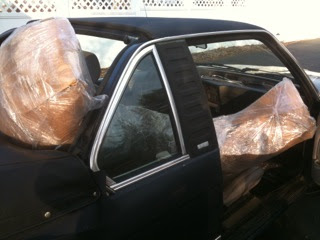 You may recall this pic from my post the other day.  ;)  That is the new (used) convertible roof and frame packaged up inside the Baur.

Here is the full story on that adventure:
http://baurspotting.blogspot.com/2013/03/baur-package-express.html Here is the old roof standing on its side after removal. 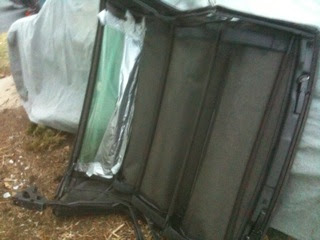 Note the duct tape around the old window.... after I poked a broom through it while clearing off 20 + inches of snow a couple of weeks ago.  Sheesh.  Just before a heavy rainstorm too.  The roof had to go, and that incident just speeded things up a bit.  Incidentally that is my 1979 323i Euro project car underneath that car cover. 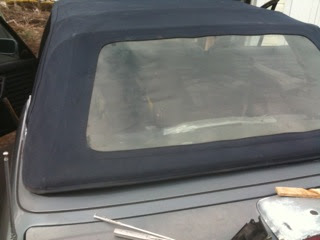 The new convertible top and frame are on the car but not fully installed. 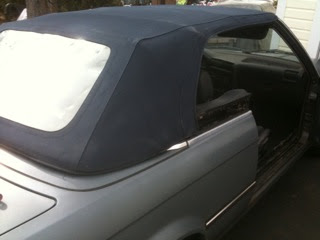 You can see that the inside panel is still upraised to allow access to the top bolt of the convertible top frame. 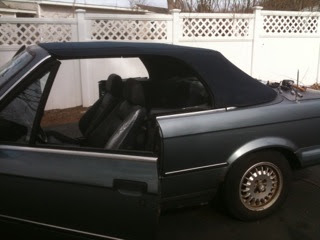 Still not all buttoned up yet, but looking pretty good. 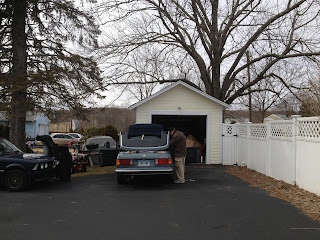 Bolting the new frame in.  Baurspotting Baur to the left with the old roof leaning against it.  1979 323i project under the car cover next to the garage.  The current project, a 1973 2002 can't be seen here, but it is inside the garage straight ahead. 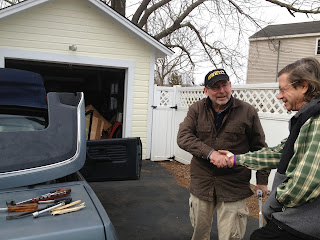 My brother-in-law Don Diederich (right) dropped in with my son, Brian (operating camera). 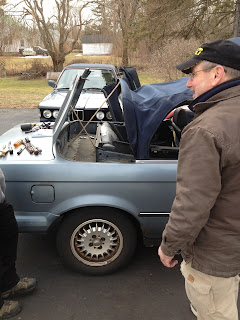 Makeshift braces keep the roof and the top stowage compartment lid open and out of the way while the new frame is bolted in.  The frame is attached by three bolts on each side.... two of which are pretty hard to get at without the proper tools:  ratchet extensions and a universal joint.   Baurspotting Baur in the background, Don D.'s feet can be seen in the left of the pic. 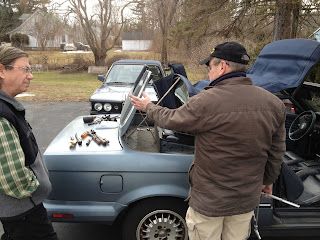 Just about to finish it up, everything is bolted in and ready to go.   Don D. at left.  Note the wrench in my right hand, key to getting this job done:  1/2" ratchet with a long extension, a universal joint, reducer to 3/8 drive, another short extension and the 13mm socket.  That is the only way you are getting that middle bolt in or out!  :)  I love it! 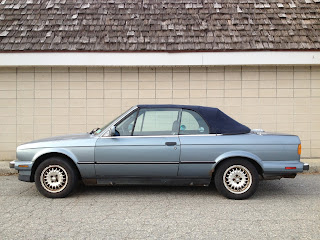 The finished product is a huge improvement over the old shrunken, leaky roof with the broken window.  A new lease on life, and ready for spring!  260K+ on this 1989 325iC. 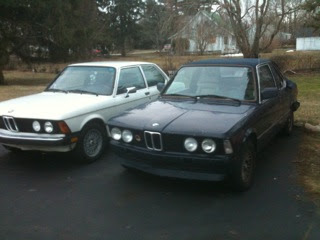 Just thought I would throw this pic in for completeness:  my two favorite E21s in the driveway.  On the left is the white 1977 320i that I used at the Holeshot Drag Race a couple of years ago:  2.0L, carbed, headers, 2 1/4 in exhaust, front strut bar, Momo 14 inch wheels, recaros, Nardi wood wheel, bumper tuck, slick top... a flat-out blast to drive!  Alpineweis, the icing on the cake.  And, of course, on the right is my 1982 323i Lapisblau Baur.   I alternate between the two of them for my daily driver.  Incidentally, the plan this spring is to build a two car garage just behind where these two cars are parked.  I can't wait!  ;)