I know this is a little unusual for Baurspotting, but.... read on.  You will see why it is here. 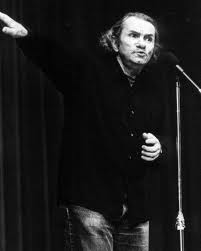 Last week my wife and I went to Block Island for a few days with our son, daughter-in-law and 21 month old grandson.  They got married on Block Island 4 summers ago, so this was a kind of an Anniversary present for them.  When we go we stay at a B&B called Hygeia House, which is owned and operated by Lisa Starr.  Lisa is a published poet and is currently the Poet Laureate of Rhode Island.  And a very nice lady.

As it happens, on Sunday July 14 Lisa was hosting her Summerfest at the B&B, an afternoon of poetry and music on her back lawn.
http://www.bipoetryproject.com/default.html
She had set up a farm trailer stage, complete with sound system, for the occasion, and there were a number of invited guest poets, both local and from as far away as New Jersey.  James Stevenson*, the children's book author and illustrator, was also in attendance.
Lisa invited us to attend and, since we were not scheduled to depart the island until the 5 o'clock boat for Point Judith, we were able to stick around for most of the afternoon.  My wife has an avid interest in poetry, and has done some writing of her own.  I am no poet--- although I do have one semi-profane limerick to my credit (but who doesn't?!!)---- but I do have an interest in the written, spoken and sung word.   One poem in particular struck me as a car guy:  it was a very clever and funny poem about a hardware store!

So we spent a very lovely (albeit hot) afternoon alternating short sessions of poetry readings by a rotating cast of poets with interludes of musical performances by a variety of solo and small groups.

Although we didn't know quite what to expect coming in, I have to say that all of the performances, both poetic and musical, were of a remarkably high quality.  I was impressed, and we enjoyed it very much.  There was even an Art Car** there (see pics below)!

Anyway, part of Lisa's stated mission as Poet Laureate is to take poetry into places where you don't usually find it.  She has an active poet's group that goes into nursing homes, schools and even ACI (Adult Correctional Institute).  I spoke to the woman who wrote and read the hardware store poem afterwards, inquiring about it.   She gave me the name of another poet, and said he has a number of poems about cars and that sort of thing.  That poet is Jack McCarthy.  More on him in a minute.

So I decided, in the spirit of helping advance Lisa's mission, that I too could bring poetry to a place where you don't usually find it:  a car blog!

Coincidentally, I am reading Rob "The Hack Mechanic" Siegel's just published book:  MEMOIRS OF A HACK MECHANIC.  We have mentioned his book previously in this blog, so you may recognize that title.  In his book, Rob includes some of the usual nuts, bolts, tools and techniques talk that we would expect in the automotive genre, but he also transcends all that to venture into the area of our complex human relationships, and the important role that things like cars, hobbies and other interests can play in achieving balance in our life relationships.  The full title of his book is perhaps the best expression of what I mean:  "Memoirs of a Hack Mechanic: How Fixing Broken BMWs Helped Make Me Whole".  Get the book, folks!

Jack McCarthy is the poet whose name was given to me by Valerie Lawson.   I did find the following poem by him, so I thought I would share it with you.

The cars I drive
don't look like much I will admit,
but mostly they've got engines that won't quit
this side of a nuclear explosion.


The Shitbox Mystique: when new friends
point at dents, concerned, and ask,
"What happened to your car?" I answer,
"It was like that when I bought it."


When I met Carol she was driving
a pretty good car,
except for the air-conditioner,
which used to make the engine overheat.
Carol also brought into my life
her son Seth and her mechanic, Peter ---
that's another feature
of the Mystique,
your mechanic
becomes part of your family,
we see more of Peter than we do of Seth,
we invited him to our wedding ---
though I'll admit, Peter wasn't actually
in the wedding and Seth was.


Now Carol likes nice things,
but what with college bills and all,
a couple years with me
and her blue Subaru
went downhill fast
and I got to see a new
side of her, that her idea of a good day
is breaking down outside a gas
station.Eventually her engine started
overheating even without
the air-conditioner; in fact
the only way to keep the temperature
out of the red zone on a hot day
was to turn the heat on.
I don't think Carol's mother
ever really bought
the unlikely physics of that
I think she thought we were
trying to make her and Ed
go home to California.
When you've got
two people driving shitboxes
you get to make some interesting decisions ---
like which one to take to Connecticut.
One has no windshield fluid
because the plastic thing leaks
and Peter hasn't been able to find
a used one that fits;
the other has something really scary
going on with steering...
but we take it anyway,
because on the map
the road to Connecticut
looks pretty straight.
Sometimes I get home from work
and Carol's ecstatic.
"Jack, I met the most wonderful
towtruck driver today. We towed
the car to Peter's,
and he brought me back
all the way to the door.
We had the most incredible conversation!
He's a very unusual person."
Right, Carol; like you're not.
A couple years with me she's on
a firstname basis with every
towtruck driver in Middlesex County.
Triple-A has us on speed-dial.
One time we were driving
somewhere together and she reflected,
"You know, if your first marriage
had worked out better, you
wouldn't have been available
for me. And vice versa."
I thought what a classic she is,
the miles look good on her.
But both of us came as is,
with dented fenders, and random
detritus in the trunk, and I said,
"It's as if we both broke down
outside the some gas station
at the same time."And she smiled
and then she laughed,
and then we both laughed,
a long soft asynchrcinous laugh
like the ticking of an engine it will take
a nuclear blast
to stop. 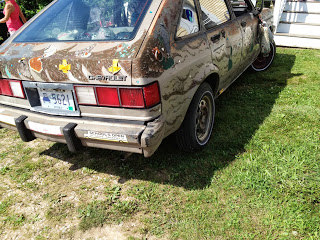 Chevette with an Island flavor! 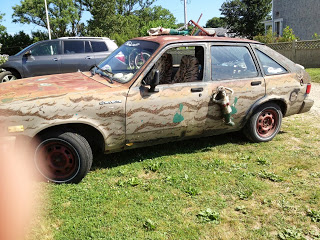 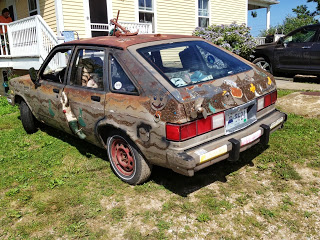 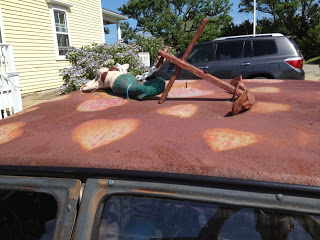 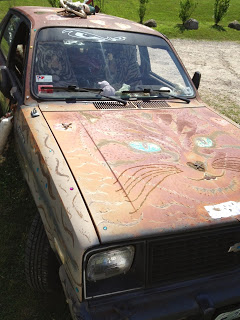 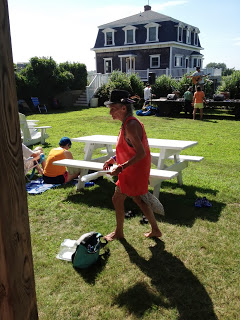 Foreground:  Ginny, owner of the Art Car!  She is a character, and lives on a boat.  She was also one of the Guest Poets.
In the background, you can see the farm stage set up in the back yard of the Hygeia House.  Next to the stage you can see Lisa Starr, our host, in the orange top.  If you are ever on Block Island, a highly recommended trip, btw, stop in say hello to Lisa.  You will probably also get to meet Brother, her Golden Retriever.  Worth the trip.