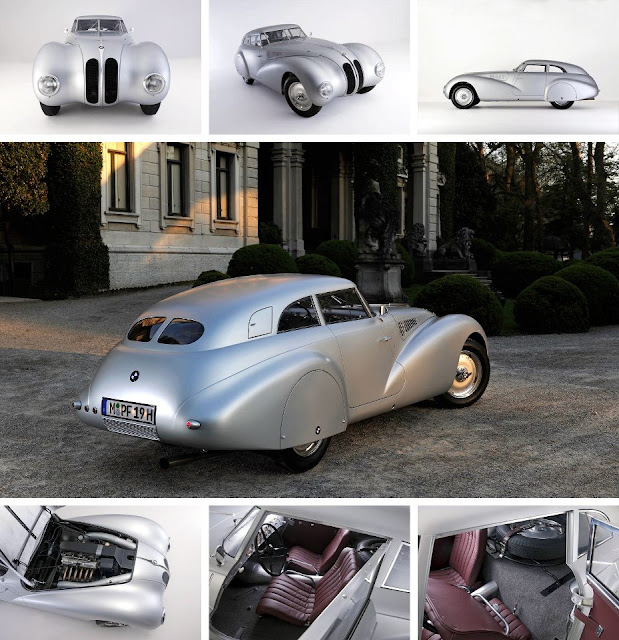 N.B. This is a replica of the original Kamm Coupe.  It is still pretty cool, considering it was 1940. 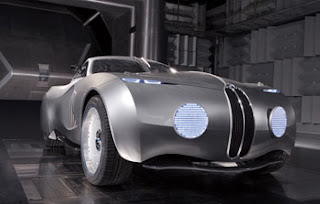 Here is the modern Concept Mille Miglia (above)


Here is the original: 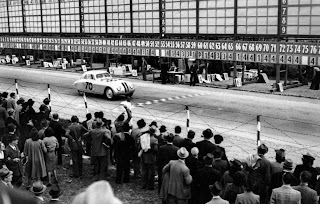 
"IN 2010 BMW completed an exacting replica of their 328 Kamm Coupé which raced the 1940 Mille Miglia. This was one of five BMWs that paritipated in the race which was eventually won by the 328 Touring Coupé to the upset of the Italian officials. Although BMW credits the design to themselves, this Coupe borrowed many of its elements from the Wendler Coupé built three years earlier.

The BMW 328 Kamm Coupé is a racing car that represents a seamless blend of function and aesthetic allure. It also underlines how far the development of aerodynamics and lightweight construction had progressed in 1940.
The BMW 328 "Kamm" racing saloon was created entirely at the BMW plant in Munich in the winter of 1939/1940- This is all the more remarkable because all BMW series automobiles originated from the Eisenach factory prior to 1945. At this time, only motorcycles and aeroengines were manufactured in Munich, The aerodynamically designed body of the streamlined "Kamm" racing saloon was constructed on the basis of design specifications drawn up by Professor Wunibald Kamm.
The newly formed “Künstlerische Gestaltung” design department headed by Wilhelm Meyerhuber was therefore asked to draw up a new streamlined body under project number AM 1008.
In order to improve the car’s straightline stability, the chassis was extended by 20 centimetres. The newly developed space frame, made from Elektron, weighed just 30 kilograms. Taken as a whole with the aluminium outer skin, this meant BMW now also had a “superlight” body in its arsenal.
The Kamm Coupé was significantly larger than the comparable Touring variant, but a rigorous adherence to lightweight design principles meant it was also 20 kilos lighter. It took several months to put the car together due to restricted capacity in the prototype construction department. But, in contrast to their Italian counterparts, BMW engineers were able to put their works racing saloon through extensive testing. In late summer 1939 the car was given a thorough examination on the Munich to Salzburg autobahn and further improvements were made to a host of details.
The investment of time and effort was to pay dividends. The Kamm Coupé had much better directional stability and proved to be far less sensitive to side winds. A Cd of approximately 0.25 (measured using a model) was well below the Touring Coupé’s figure of approx. 0.35. The works car also set a new benchmark in terms of speed, hitting a maximum 230 km/h. However, with the outbreak of war nobody knew whether it would ever get the chance to show off its talents.
The lightweight construction measures implemented in this racing car are extremely interesting. The vehicle was given a tubular space frame made of Electron (an alloy comprising 80% magnesium and aluminium) and an outer skin made of aluminium. This meant that the vehicle only weighed some 760 kg. The car was powered by a BMW 328 engine that had been tuned up to generate 136 hp. The Kamm racing saloon was built specially for the Mille Miglia 1940 and delivered extremely promising results during initial tests. However, the car was out of luck in the 1940 Mille Milia and had to retire after suffering a technical defect in the oil system.
BMW was quick to appreciate the unique status of its Mille Miglia cars following the victory in 1940, and they were soon spirited out of Munich into the countryside to prevent them from being destroyed in the war. The evacuation was successful, with all five cars surviving the wartime years virtually unscathed. However, in the turmoil of the immediate post-war period, the collection of silver racers were split up and went their separate ways around the world. Only the Kamm Coupé remained in Germany, former BMW Director of Racing Ernst Loof having acquired the car for his personal use. By this time he had become a carmaker in his own right, supplying hot-heeled Veritas racing sports cars to customers in the emergent Germany of the post-war era. However, financial difficulties were never far away and a few years later he was forced to let the Kamm Coupé go. Sadly, this automotive gem was not destined to enjoy a long life under new ownership, and it was consigned to the scrapheap after an accident in the early 1950s.
The BMW 328 Kamm Coupé is a racing car that represents a seamless blend of function and aesthetic allure. It also underlines how far the development of aerodynamics and lightweight construction had progressed in 1940.
Efforts to rebuild the car have been ongoing since the mid-1990s. Documents from the Group archive and private collectors, computer calculations carried out in the BMW development department, and the skilled hands of body experts and engine specialists have all been employed to prepare the 328 Kamm Coupé for its public unveiling at the Concorso d’Eleganza Villa d’Este. For Karl Baumer this has been an incredible project: “We’ve come up against some major technical challenges, had many discussions and racked up countless hours of research, but when you see the car for the first time you can sense the passion and professionalism invested by all those involved – both all those years ago and today.”
Story by BMW Group
Read more at http://www.supercars.net/cars/4873.html#DX20A1BSZ7gZBvDp.99
http://www.supercars.net/cars/4873.html

Bmw has unveiled a concept vehicle inspired by the 328 Mille Miglia Touring,
that won the legendary race in 1940. The concept design features a mixture
of classical styling cues and modern elements borrowed from the Z4 model. 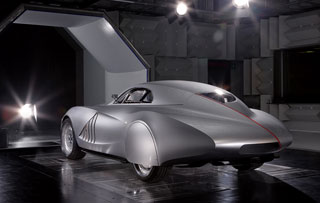 The latest BMW Concept was unveiled in Brescia (Italy) on May 10 2006 prior to the Mille Miglia, a legendary racing event resurrected in 1977 as an annual rally.
All vehicle models that competed in the original races between 1927 and 1957 are permitted an entry.
Inspired by BMW 328 Mille Miglia Touring Coupe that was driven into the record books and past the chequered flag in the 1940 race, the Concept Coupé Mille Miglia adopts a modified drivetrain and suspension from the new Z4 M Coupe.
A body 23 centimetres longer, and four centimetres lower, than BMW’s latest production sports car is set off by bespoke 20-inch alloy wheels on 245/40 R 20 tyres. 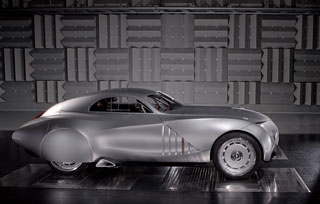 During the design of the BMW Concept Coupe Mille Miglia 2006, the designers took a step back in time and formed the car from plaster models rather than clay.
Quite literally a more ‘hands-on’, labour intensive process. The result is a greater appreciation within the design team of why classic racing cars are perceived as more emotional and artistic objects than today’s computer-generated racing cars.
The concept car’s hinged hard-top roof is a reference to the relaxation of the rules at Le Mans when racing cars moved from soft-top to hard-top construction as closed vehicles became eligible to race.
This precipitated the development of the 328 Touring Coupe from its roadster origins, allowing the model to develop further as a lightweight, aerodynamic ‘bespoke’ racing car.
Similarly, the new Z4 Coupe has been derived from the Z4 Roadster soft-top as a ‘behind-the-scenes’ project driven by the designers’ enthusiasm. This coupe development leading to the production of the new Z4 M Coupe Racing car.
While the hinged roof structure recalls past events, the principle function of the hinged system, that also raises the cockpit, negates the requirement for doors (reducing weight) and increases torsional stiffness.
The car features an extremely lightweight structure, with an aluminium shell ‘stretched’ over a lattice frame and body panels made of carbon-fibre reinforced plastic (CFRP). The adopted body paint is ‘fine silver’, a full-gloss paint colour with extremely fine pigments that hints to classic silver race colours. 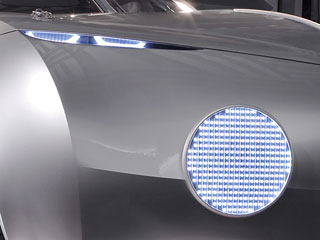 The large circular headlamps inspired by the shape of the 328 units are not integrated into the body of the car, but attached as flat elements.
Modern LED technology facilitates this design function that frees up the designers to develop more flowing and unbroken body forms.
This manifests itself on the Concept Coupe by uninterrupted bonnet and side panels.
Inspired by BMW’s glorious motor racing heritage, the science of aerodynamics was addressed with thoroughly modern techniques and design resolutions.
Side panels and the rear section of the car were designed to allow turbulence-free flow of air up to the tail where the airflow is separated. 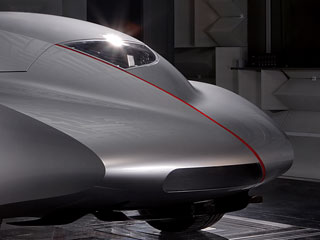 Carbon-fibre underbody fins and diffusers on the front and rear aprons also contribute to the car’s aerodynamics.   Meanwhile air intakes in the A-pillars, arranged in a slim Z-line, direct cooling air from the six-cylinder in-line engine and contribute to developing downforce and reducing turbulence at the wheel housings.
The Concept Coupe is powered by the BMW six-cylinder inline petrol engine that powers the new BMW Z4 M Coupe.  Modifications have been made to the inlet and exhaust systems of the 343 hp unit to give the concept car more of a ‘racing’ sound at both idle and full throttle.
The interior retains the functional simplicity prevalent in both 328 racing cars and Z4 production cars, but in a modern presentation. Only three materials are used; thin stainless steel, untreated cowhides, Lycra fabric. This purist form even extends to letterings, logos and symbols embossed into surfaces using laser technology. 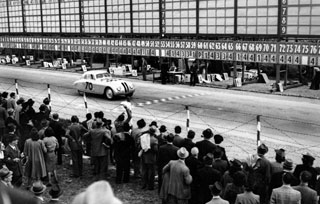 In the 1940 Mille Miglia, the winning BMW 328 Mille Miglia Touring Coupe recorded an incredible, and thoroughly modern, 166.7 kmh average speed over the course’s 1,000 miles.   This remains the fastest average speed for any Mille Miglia.
The BMW 328 was one of the most successful competitive vehicles in BMW’s long motor sport history.   Introduced in 1936 the racing specification 328 won its class in almost every race in which it competed between 1936 and 1940, and continued winning races in the 1940s and 1950s.
In 2004, the BMW 328 Mille Miglia Touring Coupe became the first car to win both the Mille Miglia (1940) and the modern-day classical version of the race.
The design team responsible for the original 328 succeeded without the benefit of computers. Building models was the only option. But despite the digital revolution, modelling remains a fundamental part of the design process for today’s BMWs.   The company’s designers remain loyal to this process as it connects them emotionally to the form of a new product.
According to Bmw, “The concept car looks to both the past and the future in its styling and construction; it pays homage to the outstanding achievements of the engineers who contributed to BMW’s successful motor sport heritage, whilst confirming the passion to construct dynamic cars from the most modern materials and processes available.   This remains a fundamental concept for today’s BMW road and race cars.”
(Source: Bmw)