I started a Pinterest page a while back called BMW Baurs.   I confess that I don't quite 'get' Pinterest, and consequently, I haven't paid much attention to it lately. OK, Ok, I forgot all about it.  Anyway, I happened to take a look at it today for the first time in....  dont ask how long..... and look what I found: 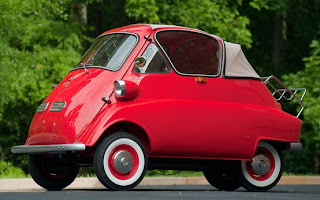 Thankd to Liliana Lucano fo rthis pic of a BMW Isetta 300 Cabriolet.... quite Baur like: fixed frame, two section cabriolet style.  The rear cabriolet folds down, the front appears to fold/slide back accordion-style to open! 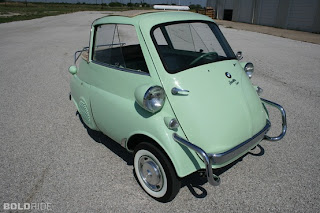 Here are pics of a similar BMW Isetta 300 Cabriolet.  You can see the rear has folded down, and the front section can be opened also.  Thanks to Iris Fingerhut for these two pics from Boldride.com!

I love the Isetta! 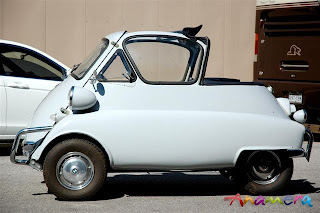 This 1955 BMW Isetta 300 Convertible . It is equipped with a Manual transmission. The vehicle is Grey with a Blue interior. It is offered As-Is, not covered by a warranty. 1955 BMW Isetta 300 Cabriolet Chassis No. 494143 Engine No. 513506 Specs: 13 hp, 295 cc BMW four-stroke single-cylinder engine, four-speed manual transmission, swing-arm independent front suspension, semi-elliptic leaf spring rear suspension, and hydraulic drum brakes. Wheelbase: 58&quot; The iconic Isetta bubblecar began life in Italy, a product of Iso, SpA., maker of refrigerators and motor scooters. Renzo Rivolta, owner of Iso and later builder of the Iso Rivolta and Iso Grifo GT cars, felt that a small car would enhance his product line and adopted a design by engineers Ermenegildo Preti and Pierluigi Raggi. Introduced in Turin in November 1953, it stunned the public with its front-opening door and bubble-inspired shape. Production in Italy ceased in 1955, though license-built efforts continued in Spain, France and Brazil. The most prolific producer of Isettas, however, turned out to be BMW in Germany, which began production in April 1955 using a 247 cc motorcycle engine of their own manufacture. Re-engineering was so complete that no parts actually interchanged with the Italian predecessor, but the basic design remained true to the Isetta idea. In 1956, sliding side windows replaced earlier &ldquo;bubble&rdquo; units, and engine displacement was increased to 295 cc, with the resulting car named Isetta 300. More than 160,000 were built through 1962. 494143: This Isetta 300 is nicely presented in dove gray with complimenting blue-gray interior upholstery and remains in fantastic restored condition. Its most unusual and extraordinarily rare feature is the &ldquo;bubble window&rdquo; cabriolet body. It is believed that only about 50 of these were built by BMW, the vast majority of which were exported out of Germany and sold in the U.S. or South American markets. With only about 50 ever built, the number of survivors is tremendously low. For the microcar collector, this is an opportunity not to be missed. All Isettas had sunroofs. Only a limited few had convertible tops! Gorgeous example of the increasingly desirable Isetta! An always fun-to-drive European classic! German-built, Italian-inspired microcar! Extremely rare bubble-window export cabriolet! Only: $29,750.00!! For more information, contact: sales@driversource.com We buy all classic European and American sports cars! One vehicle, or entire collections! Finder's fees paid!! - - Contact DriverSource Sales Team at 281-497-1000 or sales@driversource.com for more information. - Priced to Sell Contact Jose Romero 281-497-1000 -
Color: Grey
Interior: Blue
Body Type: Convertible