After some initial reluctance due to the chilly weather, and a bit of friendly prodding from Greg in Australia (where it is summer, btw) I decided to 'bite the bullet', and begin the timing belt change on my 1982 323i Baur this afternoon.  I ordered the parts a few weeks ago with the intention of using it as a winter project.  I actually plan on doing TWO timing belt projects this winter:  the Baur and my 1991 325ix.  I did the Baur timing belt when I first bought it in 2010 (actually winter of 2010-11) because the odometer was broken, and it said that it had been done at 231,000.  The odometer has been stuck at 242,000 since I bought it (and long before that!), so I am am just going on the elapsed time (approximately 4 years), rather than the mileage guidance.  The rule of thumb for the M20 timing belt service (depending on who you ask) is 4 years or 50,000 miles.    I am at the '4 years' point, and, since it is a daily driver, I am probably not far from the 50K either.  I love this car so I will not wait any longer!

So, Step I:   be prepared!  It is a little chilly outside, so I want to dress for the occasion!  I brought out my good friend:  Long Johns Silver! 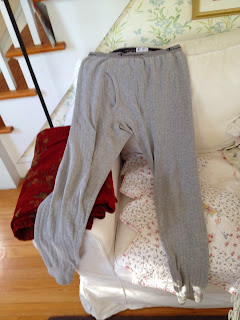 Yeah, you heard that right!  Meet my friend, Long Johns Silver!  An invaluable friend when you have to work outside in the winter weather.  Accept no substitutes!  ;)

N.B.  I was very comfortable all afternoon, despite the fact that the temperature actually dropped into the 20's.

OK, now to the work at hand.  I followed the standard procedure.

NUMERO UNO:  Stay safe!  Here is my set up: the front end is up on steel ramps.  In the unlikely event that those steel ramps collapse, I have inserted a redundant safety system of 3 ton steel jackstands under the front end.  Rear wheels are chocked with 4 x4 wood blocks.  Emergency brake is set.  I have rocked the hell out of this set up:  there is no way it is coming down on me.  I can roll under it in complete confidence.
Sidenote:   I accepted a delivery for our neighbor today, who was not at home when Fedex delivered it.  When she came to collect her package, I was under the Baur on a creeper, preparing to remove the damper.  She was very surprised to find me there and asked:  "Isn't that dangerous?"  'Yes, it is", I said, "but I have taken proper precautions."  ;)

And here they are... I NEVER get tired of reiterating how important it is to be safe!  Use redundant safety systems, boys and girls!

Rear wheels are chocked with 4 x 4s, and the emergency brake is set. 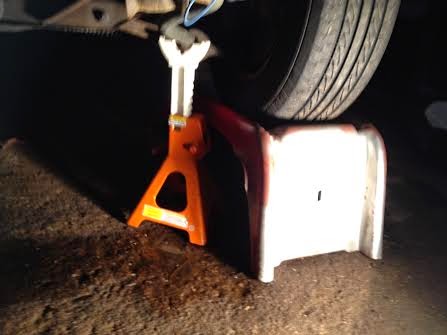 Driver's wheel on a steel ramp with a 3 ton jack stand as a backup. 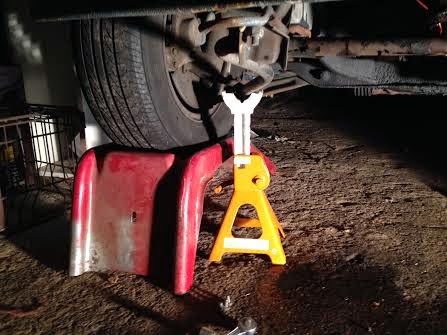 Passenger's wheel is also on a steel ramp with a 3 ton jack stand as a backup. 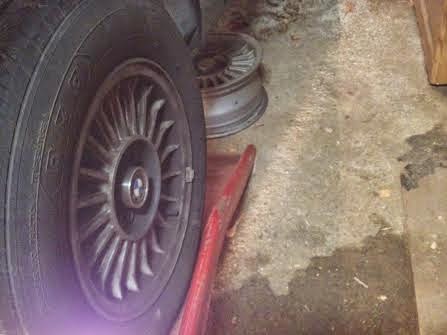 Steel rim under the chassis as a further safety backup.    If the ramp collapses and the steel jackstand fails, the car will fall on this rim, giving me a an escape route, in a worst case scenario.   Always do this.

This is my stopping point today:  cooling system drained, radiator removed along with all hoses; timing belt covers removed;  timing set at TDC.   Ready to remove and replace belt. 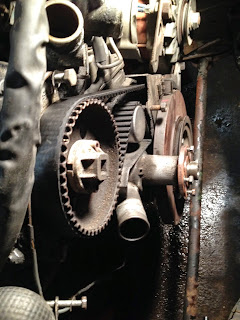 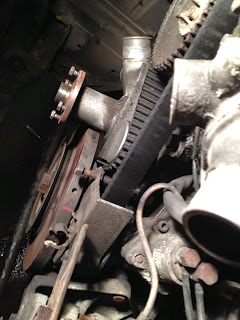 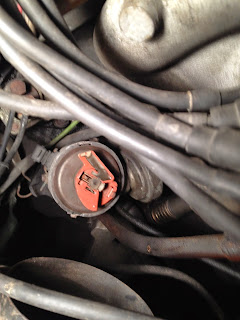 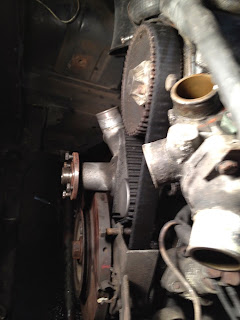