BMW 700 (Including Some Baur-Built): The Car That Saved BMW!

Did you know that in the late 1950's BMW was on the brink of bankruptcy?  Here is the story for the car that saved BMW!

Why am I posting it on Baurspotting?  Because Baur played a role in this success story:  The 700 convertible and the 700LS models were designed and built by Baur in Stuttgart! 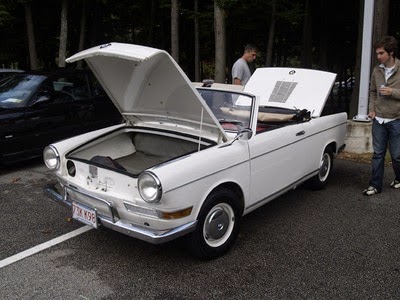 Here is the story:  the information is from BMW, and the article was posted in the CARTYPE website, reprinted here in its entirety.  the link to the original is at the bottom of the page.

Munich. Things did not look good. Indeed, BMW was rapidly approaching the final collapse and demise of the Company in the 1950s: While motorcycle production had reached a new record in 1952, production figures decreased more significantly in the years to come than they had increased in the late ’40s.
To set off this dismal end of the motorcycle market, BMW built the prototype of a new small car in 1950, taking up the lines of the pre-war BMW 327 and the 600-cc fl at-twin engine so popular at the time. But the project was subsequently discarded for economic reasons.

The BMW AG management board at the presentation of the 1959 BMW 700 LS Luxus Coupe. (source: BMW)