Baur and other Rare BMWs set to cross the block at Amelia Island! 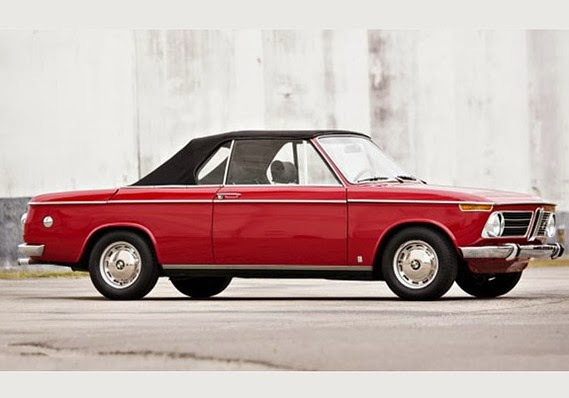 Rare BMWs set to cross the block at Amelia Island

Neue Klasse models, Bertone coupes and more will be offered at the Gooding & Co. Amelia Island sale
by: Jay Ramey on 2/18/2014


If a BMW 501, BMW 503, and a BMW 507 all appear at the same auction, odds are they're probably from the same collection. And it just so happens than Gooding & Co. will be offering a very eclectic mix of rare BMWs at their upcoming Amelia Island auction, including the ones listed above.
Yes, they are all from one collection. And what a collection it is.
More than 15 classic BMW cars will be on offer March 7 at Gooding & Co.'s venue at the Omni Amelia Island Plantation in Amelia Island, Fla., most of them without reserve.
"Spanning four decades of German engineering and innovation, these cars represent a significant presentation of BMWs," said David Gooding, president and founder of Gooding & Company. "The emerging market for BMWs has set a trend in the collector-car community not unlike the demand for Mercedes and Porsche from the same period. It is a very exciting time for these collectibles, and we feel privileged to offer this impressive single-marque grouping in Amelia Island."
Let's take a look at the rare models on offer:

Gooding & Company
The 700 Luxus offered a bit more room, but this is still a microcar viewed through today's eyes.
Here's a BMW you don't see every day, even at marque events: a 1964 BMW 700 Luxus LS. These came out in 1959, right when BMW was getting out of the bubble car business; cars like the 600 and the 700 were the company's most important steps toward larger cars in the tough post-wars years. Powered by a 697-cc 2-cylinder boxer engine, the 700 Luxus LS (which will never be confused with the Lexus LS) made all of 38 hp. It featured a four-speed manual transmission along with an independent suspension front and back. This example came into the country in 2010 after receiving a full restoration, and it's claimed to be a numbers-matching example. If it sells anywhere near the $25,000-to-$35,000 estimate, this should be a bargain if you really want to have the only one at the next BMW meet.
There are actually a couple of these in the auction, the other car being a 1965 700 LS Coupe (Ed. Note:  Shell by Baur, folks!)*  with a smaller, forward-look greenhouse. It's in condition similar to the example above, and it looks even more cheerful due to its color scheme.

Gooding & Company
A rare and original 507 in an understated color.
The headliner of the BMW collection is doubtlessly this 1958 BMW 507 Series II, titled as a 1957 car. One of only 252 examples built, this Series II example is finished in white over a blue interior, and it is claimed to be a numbers-matching example. These are admired for their styling to the point that many forget what's under the hood, which happens to be a 3,168-cc alloy V8 engine making 150 hp mated to a four-speed gearbox.
Designed by Count Albrecht Goertz, the 507 was borne out of New York BMW dealer Max Hoffman's desire that BMW produce a stylish, sporty roadster that he could sell to his wealthy customers. Since this was a time when BMW was small (and desperate) enough to grant such requests, the 507 went into limited hand-built production, debuting at the 1955 Frankfurt motor show.
The result was just what everyone had hoped for, even though actual demand was lukewarm at best. After all, if demand were greater, BMW would have made more of this elegant roadster. This example is one of the later models, so it benefits from a slightly redesigned dash and some other interior tweaks. This was reportedly sold new to "someone in the movie business" in Los Angeles, and it later resided in several collections in the U.S. and in Europe. This car is claimed to have never been restored, and it is listed as being original throughout. One of 202 believed to have survived, it's estimated to bring between $1.5 million and $1.8 million -- a bit of a premium over where these have been trading, but if claims of complete originality are true, it's a fair range. Watch out, 300SL!

Gooding & Company
A rare Baur cabrio based on the roundie 2002.
The time to get in on 2002s was... years ago, really, before the year 2002. While BMW fans are unlikely to land a steal when it comes to this Neue Klasse model, they'll nevertheless be pleased to see this sharp 1971 "roundie" cabriolet by coachbuilder Baur. The company might be famous on this side of the Atlantic for its E21 Targa-style cabrios, but their BMW-tuning roots go back much further. This example has been repainted from the original Golf Yellow early in its life. After its importation to the U.S. it received some bodywork and was repainted in Granada red. This car has been in enthusiast hands for much of the last 15 years, and it appears to have been well looked-after, even picking up some awards at marque concours events. Estimated to sell between $40,000 and $60,000, this appears to be a nice example of the rare Baur full cabrio.

Gooding & Company
A 2000 CS in a popular color for these.
The 2000 CS is one of the most striking Neue Klasse cars, and it's rare to see a well-sorted example come up for auction. While the values of 3.0 CS "Batmobiles" have skyrocketed in recent years, the 2000 CS coupes remain a bit of a bargain. Powered by a 1,990-cc OHC inline-four engine, these sporty personal coupes offered a bit of luxury. The 120-hp engines didn't make these tire-smoking muscle cars, but that's not really what these were about. This particular example has been in marque enthusiast hands since 1976, and its history is well known. If this 1968 example brings anywhere near the $40,000 to $60,000 estimate, the price paid could seem like a bargain in a few years.

Gooding & Company
One of BMW's largest post-war sedans.
The 501A isn't quite what collectors picture when they hear "classic BMW," but that doesn't make this impressive sedan any less important. Nicknamed Barockenangel, or Baroque Angel, the BMW 501 A debuted in 1951, featuring a curvy, slightly overstyled body that simultaneously evoked comparisons with pre-war BMWs as well as with Mercedes-Benz Pontons. These sported 2,580-cc V8 engines with single Solex downdraft carbs, good for about 110 hp, and they were the top offering from the Bavarian marque in the day.
Not a lot were made, and years go by without us seeing one out and about. This example was discovered in Belgium in 2005, and it has subsequently been completely restored by a number of well-known marque specialists. This impressive example is estimated to bring in between $90,000 and $120,000; obviously, you can't restore one for that much, even if the car were thrown in for free. Having said that, these change hands rather infrequently, and their values are really only understood by marque experts. This is easily one of the best examples of this model in existence; if it sells within the estimated range, it'll seem like a bargain in the long run.

Gooding & Company
A rare US-spec 2000 sedan, one of the forgotten Neue Klasse cars.
While the 2002 model might be the most popular Neue Klasse car in the U.S., it's easy to forget that it was, by no means, the first Neue Klasse car to debut in Munich. A whole range of coupes and sedans came before it, and one of the most overlooked Neue Klasse models today is perhaps the 2000 sedan. The stunning red example above is a 1970 example wearing (some would say dorky) quad-sealed beam glasses and "push bar fangs."
U.S.-spec trimmings aside, this is a reasonably tidy car delivered new to New Jersey and has been obsessively maintained by its owners, receiving Ziebart rustproofing early in its life. The car was sold to its second owner in 2001, and it has been thoroughly serviced since. A numbers-matching example with plenty of documentation, it presents very well and is estimated to bring between $20,000 and $30,000. This sedan will be offered at no reserve, and it could prove to be a steal if there aren't enough bidders out there salivating over a sealed-beam Beemer. A few have entered the country in recent years wearing stylish Euro-spec specs, but interest in this model remains low. If you need to have the only 2000 sedan in your state, this could be your ticket.

Gooding & Company
An elegant 3200 CS from 1964.
It's difficult to believe now, but BMW was struggling financially in the early 1960s and just barely avoided being taken over by automakers like AMC. One of the cars BMW tried to use to get out of its financial quagmire was the 3200 CS, which debuted in 1961 using the chassis and mechanicals of the similar-looking 503 coupe of the 1950s. Just like the 503, this was a hand-built car styled and built by Bertone in Italy and used a 3.2-liter V8 good for 160 hp; top speed was 125 mph. This 1964 example has a well-known history, being sold new in Munich and later migrating to the states in the late 1970s. Not the best possible example of the model, as the photos of the interior demonstrate, but it's a solid driver. This example is expected to fetch between $65,000 and $85,000.
Have a look at the rest of the cars that'll be offered by Gooding & Co. at Amelia. A few more interesting BMWs can be found there, including a white M1.
*The shell of the 1964-65 700 LS Coupe was by Baur!