Score one for the grease monkeys in Texas. 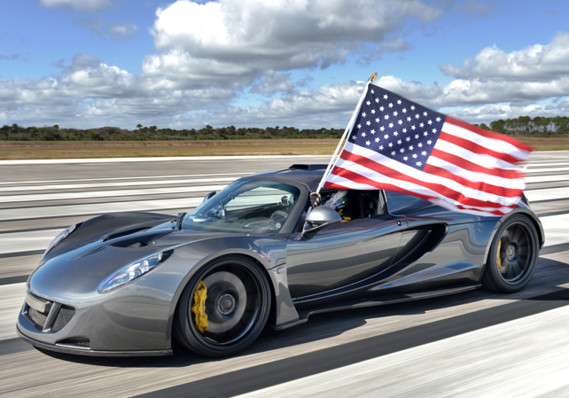 While less hardy souls were busy romancing the ladies with chocolates and roses, test pilot Brian Smith spent Valentine’s Day pushing earthly limits at the Kennedy Space Center by hitting 270.49 m.p.h. in a 1,244 horsepower Hennessey Venom.
That’s the highest speed ever reached by a production car, breaking the 269.86 mark set by the Bugatti Veyron Super Sport back in 2010, according to Top Gear.
Here’s footage of the insane run in which the 7.0-liter twin-turbo GM-sourced (Yes, GMGM -sourced) V8 accelerated from 20 m.p.h. to 120 m.p.h. in just 7.71 seconds, as VBox figures showed, per Top Gear. The Venom’s engine, built in Sealy, Texas, rocketed the car from 120 m.p.h. to 220 m.p.h. in less than 10 seconds.
“At the very top end, there was a little wandering, but hey, we’re going 270 m.p.h.!” the former Michelin test engineer told Top Gear. “It was still pulling. If we could run on an eight-mile oval, we could go faster than that.”
While the numbers show the Venom to be the fastest, it won’t be recognized by Guinness as such. To qualify for that, the vehicle would have needed to make another run in the opposite direction to account for winds. And NASA wasn’t allowing another run. Semantics, though. The Veyron Super Sport hit 265.96mph one way, and 269.86mph the other — both short of the Venom any way you look at it.
And what’s more, the folks over at Guinness put the bar at 30 units to be considered a production car. Hennessey is only rolling out 29.
Meanwhile, there are still some 40 Bugattis valued at about $85 million, waiting to be snapped up. The coupes, well, you’re too late for those.
– Shawn Langlois