Hubert Hahne and Diana Körner  circa 1970.

In case you are wondering why I posted this for Valentine's Day.........

"Hubert Hahne, racing driver and BMW agent based in Dusseldorf presented one to his wife as a wedding present – ‘Diana Korner’ who was a German actress at the time. The “Diana” was a BMW 2002Ti with special equipment. Hahne decided then to carry out a small series of 12 cars, with the agreement of BMW, all painted of different colours, some with turbo engines or 6 cylinders. It is interesting to note that the numbers of chassis’s, as these cars are all successive, proving well that the Diana’s were not an official model in range BMW, the firm brought Hubert Hahne the necessary logistical support for the realisation of this very special series. These “Diana’s” were also equipped with steel sliding roofs, racing bucket front seats, electric front windows, 5-speed gearboxes, racing door mirrors, top tint front windscreen, twin headlamp upgrade, dashboard and panels on the doors covered out of deer."
http://www.bmw2002.co.uk/history-of-the-02/the-bmw-dianas/ 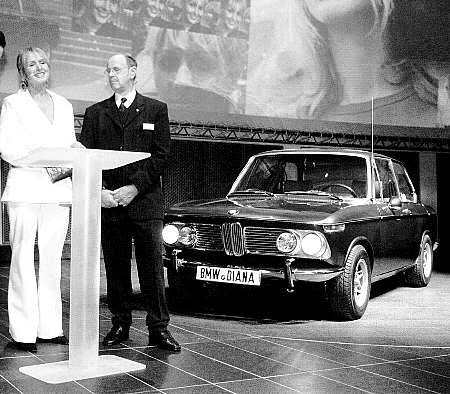 And the final piece..... which ties all of this together to Baurspotting: Here are the 12 Dianas, pictured at Stuttgart, where the conversions were done by Baur.

"After having bestowed his wife with a car that carried her name, the car had started to attract a considerable amount of attention. So much attention, in fact, that Hahne was urged to make a luxury edition of the 2002tii. With the agreement, and technical support of BMW behind him, Hahne had agreed to produce a small series of twin-carbureted 2002ti-based ‘Diana’ cars, all of which were to be converted by Baur, in Stuttgart, Germany."

Happy Valentine's Day from Baurspotting!
Posted by tom82baur at 10:06 AM