Thanks to our friend John Dickey via our friend and fellow Baur owner David Tothill for sending along the link to this Bring a Trailer project sale!

Baur #3387 is not yet listed in the International Baur Registry*, so it qualifies as a NEW FIND!  Congratulations to the owner, Mike! 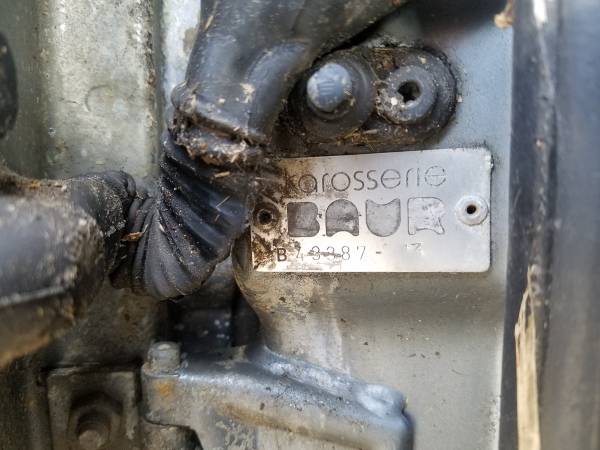 This 1985 BMW 320i Baur Top Cabrio or TC (VIN WBAAA310209531341) is a non-running project offered on a clean Florida title according to the seller. The car has been sitting for about two years, and the seller believes that its never-sold-in-the-US M20B20 six last ran at least that long ago. A rust “situation” is also mentioned, with corrosion visible on rear fenders and other places. Overall condition is rough, but the car does appear mostly complete with lots of cool Euro spec parts in view, and Baurs are always interesting to see on US roads. Find it here on Craigslist Bradenton, Florida for $2k.

Faded paint looks like it may have originally been Cosmos Blue, but horizontal portions of the finish look more like primer now. The body appears straight from we can see, but there’s some worrisome rust visible on the rear fenders and perhaps a bit more on the rearmost portions of the rockers. Wheels are ubiquitous bottle caps, and European equipment like the headlights and front clip add interest. Finish on the bumpers looks OK, but the rear is becoming detached and the front shows evidence of an impact that DOT-spec diving boards would have likely shrugged off. Tacked-on side markers indicate that the car was federalized at some point, possibly as late as the early 1990’s.

Although definitely a bit quirky, we’ve always appreciated Baur’s take on these cars, as the convertible top design seems to do an effective job of retaining the Hoffmeister Kink and general greenhouse shape. The cloth top seems to have survived decently well here, but the zip-out back window has become partially separated and appears to show evidence of cloudiness and yellowing. Fitment still looks fair however, and just one worn-through hole is highlighted in a photo.

Factory gray vinyl upholstery isn’t common in US spec ars, and even with seams split wide open it’s still a cool sight here. Other issues include a heavily cracked dash, worn carpeting and a missing stereo head unit faceplate. Cheap looking aftermarket speakers are also in view, but some positives include a neat basic digital-clock where American market cars most often have an OBC, along with a cassette holder next to the E-brake lever. The steering wheel is a factory offered three-spoke sport design that’s not to be confused with an M-Tech I, and the shifter looks like it could be original. Photos of the trunk show the jack and battery cover in place.

Opening the hood reveals an M20 that’s not in running condition. It sounds like a few starting attempts have been made, but no further details are offered. These two-liter 12-valve sixes made 127 HP and 128 lb. ft. of torque for 1985, sent to the rear in this example via a preferable 5-speed manual transmission.

Peaking at the underside of this one ma reveal a deal-breaking amount of corrosion, but these are rare cars that don’t come up for sale in the US too often, and at the price anyway, this one looks like it might be worth a closer look. At the very least, it’s got some great parts that could benefit the rest of the E30 community.