Thanks to our friend, Paul Bowen, for sending me the link to the new Gazette published by the Larz Anderson Automobile Museum in Brookline, MA.  We have done posts on multiple occasions about the Larz Anderson, and personally, it is one of my favorite venues and shows.  We have attended BMW Day for the past few years, and we have also been in attendance on German Car Day. A beautiful place, a well-run show, and a great Collection of their own in the Museum.  It is billed as "America's Oldest Car Collection" It is worth the trip to Brookline! I love the place! I have included Baurspotting's piece below, but you may recognize some of the other featured cars:  Stan Chamallas' 1973 3.0 CS, and Rob Siegel's "WARP 9" 1973 3.0 CSi!  The link is below!

Here is our headline for the story:


Baurspotting and other delights by Richard A. DeVito, Sr. 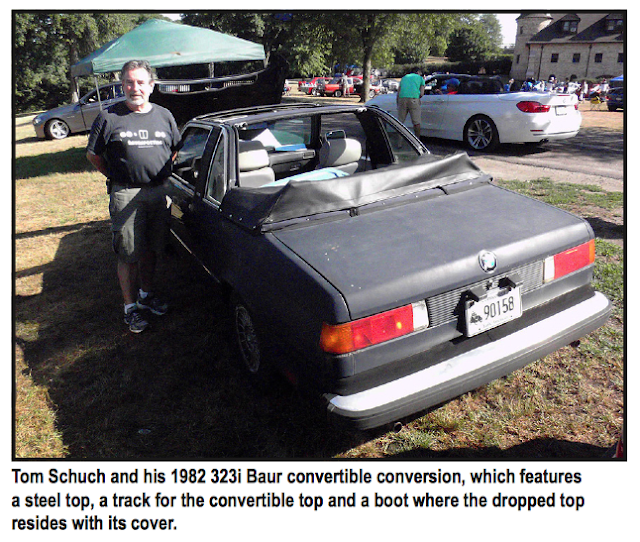 Every time I go to BMW CCA Day at Larz Anderson I learn something new about that wonderful German engineering. Last year I learned that Zündapp motorcycles owned BMW til around 1929. This year I learned about Baur BMW conversions.
Tom Schuch, from Niantic, Conn., brought his conversion, which start- ed life as an ordinary two-door coupe and was shipped to Baur Engineering to strip the sheet metal off the roof and install a sliding convertible top, just like the French Deux Chevaux.
Most car companies stopped making convertibles in the late ’70s be- cause of the fear of roll-overs. Don’t know about you, but I’ve had probably forty converts in my life and not only have I never rolled one, but I’ve never seen one rolled. I guess the what-if crowd was hard at work.
Tom told me a guy who had a Baur conversion put another BMW on top of his convertible to show how strong it was. Neat. Of course, the what- ifers never thought about the fact that with a ragtop, an extra 400 lbs. on the frame increases road-hugging ability in a convertible.
Tom has retired from being director of a home for troubled boys. He’s moved on to having a home for BMWs. He owns — besides the ’82 323i Baur — six BMWs, a ’73 2002, a ’77 320i, a ’78 320i parts car, an ’89 325 convertible, a ’91 325ix AWD, and a 2005 X3 6-speed manual.
In case you want to follow Tom, his Baurspotting blog is http://baur
spotting.blogspot.com.

Thank you to Richard A. DeVito, Sr. of the Larz Anderson Gazette, and special thank to Paul Bowen for sending me the 'heads up"!

Paul Bowen's family was the owner of the 6 Series 628CSi Custom Convertible that we featured here in Baurspotting a few years ago when we spotted it at .... you guessed it:  the Larz Anderson BMW Day!   You see why I love this place!  ;)

Here is the 628CSi in 2015 at Larz Anderson, with our friend and fellow Baur owner Rodney standing next to it ..... wearing one of Baurspotting t-shirts!
http://baurspotting.blogspot.com/2015/08/our-baurspotting-t-shirt-shows-up-in.html

Paul sent me this pic just now, it is in Germany, and he included the following note:  It was the first e28 based 6 series off the line and was given to a shop for this and then BMW used it to asses if they should make a production run . They decided that they couldn't compete with the rigidity of the Mercedes SL in the end. 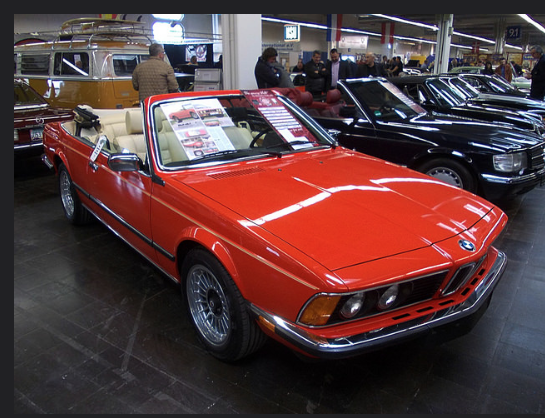