My poor neglected 1977 320i slick top has been suffering from a no start no crank issue, that I first noticed about month ago when I went to move it around in the driveway.  Over the last couple of years----I do not drive it much---- it has had an intermittent issue where it just cuts out for no apparent reason, and then starts right back up immediately. Part of the reason that I haven't driven it much lately is exactly that:  I don't know why it wants to cut out like that, so I don't trust it. 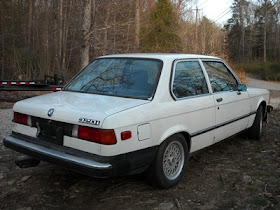 This is my 1977 320i as it appeared when I first bought it in 2008.  It is a 'slick top', converted to carbs by previous owner, Recaros, Nardi wood wheel, MOMO rims, front strut bar and Stahl headers.

I had a nagging suspicion that this was an ignition problem.  This was something that I dealt with years ago on my 1979 323i, at which time I replaced the entire ignition switch and cylinder, solving the problem.  Not a bad job if you don't mind working on your back, over your head, under the dash, feet lapped over the driver's seat!  Not to mention the difficulty in finding a replacement ignition switch for a car that is over 35 years old!

So I was kinda hoping it wasn't an ignition switch problem! 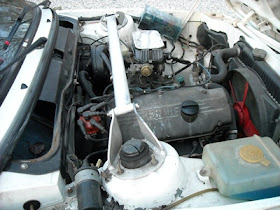 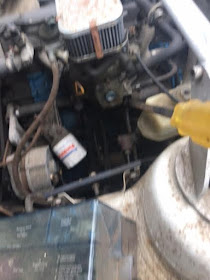 Here are a couple of engine bay pics, sorry for the poor quality.  Yup, that's yer starter, right in there!  Stay tuned for a demo of an Old School technique to jump the starter.  ;)

I should mention that the battery has been mounted in the trunk.  So I hooked up the battery charger to the positive connector mount under the hood, and grounded it to the body.  I let it charge for a bit, and then tried the ignition.  When I turn the key to 'start', dead silence.  No click, nothing.  I tried the lights.  Taillights come on and flashers work, but no headlights at all.  Hmmm.

Battery is charging, so headlights should be on, shouldn't they?  I spun all the fuses, and reseated all the relays. No change.  I tried  hooking up my remote starter switch to the starter to see if that would give it some life, but nothing there either. Not a click or a spark or anything.  It has been a while since I used that little tool, so I thought.... maybe I wasn't hooking it up right.

I haven't done this in years, but back in the day, it made me a hero more than once.  Most notably when my girlfriend at the time got stuck with her 1967 Mustang Fastback!  I crawled underneath it with my trusty Craftsman screwdriver in the parking lot at Sears, oddly enough, jammed it into that starter, shorting the ignition, and that sucker roared to life! That was enough to get her to her dad's dealership where they replaced the starter.  She thought it was a miracle, and I declined to disabuse her of that misapprehension, to quote George Costanza!  ;)

But I digress.  I have recently acquired a very large ----ok huge---- screw driver.  And I thought this may be the perfect time to put it to...... we'll, let's call it an 'unlabeled' use.  You can see it in the pic above, but here is a better view, as I put it into action. 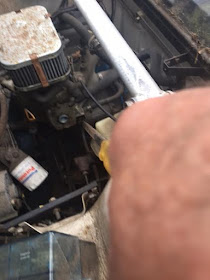 The head of the screwdriver is actually large enough that I can short the battery power connection on the starter to the ignition switch connection (with the key in the 'on' position) to test if the starter will crank. 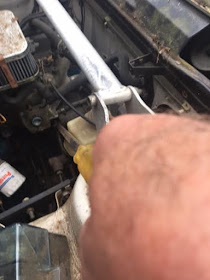 I should note that I am doing this carefully, since I have the battery charger hooked up to the positive mount and grounded to the body. 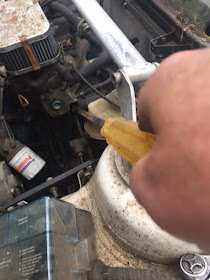 Houston, we have contact!  We have liftoff!  The solenoid and starter engaged, cranking the engine over beautifully.... although it still wouldn't start.  (It hasn't run since Christmas, or so, and it was always a little hard starting after it sits for a while.)   A little starting fluid in the carb got it to fire sufficiently to satisfy me that this wasn't the problem.

Starter and solenoid are working as they should, so thatt leaves the ignition switch to be tested.

I climbed into the car, and removed the lower cover of the steering column.  As I started to reach around toward the ignition switch, I spotted a little spark coming from the lower end of the ignition cylinder where the switch connects!  And this is what I see! 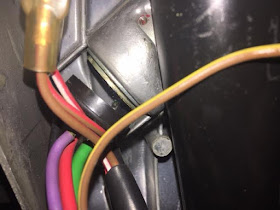 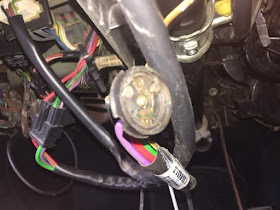 That is NOT supposed to DO that!

I was actually greatly relieved to discover this, because it now all makes sense!

AND..... since I have a complete spare lock, cylinder and ignition switch with wiring that I saved from the 1978 320i that I scrapped last year... this problem is easily rectified! 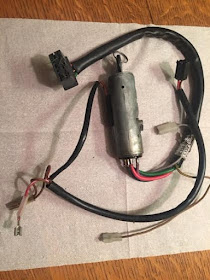 So now my task is to simply swap in the new one!  That will be a bit of a pain, since I will have to deal with those damn shear bolts again!  But all in all, this was a great little afternoon project which resulted in discovering the source of the problem!

And that is ALWAYS a Happy Ending!  ;)